I had another OB appointment yesterday. I had to do the glucose test, which tests for gestational diabetes. I'd heard that the stuff they make you drink is terrible, but I really didn't think it was all that bad. It tastes like a watered down orange pop without the fizz. I don't have the results yet, but hopefully they are negative.
I got to see her again on the ultrasound. He said she weighs 2.7lbs, which is in the 52 percentile, and her heart rate was 143 bpm. She was super active, as usual, and he commented yet again on what an active baby she is. Hopefully she'll be a little less active once she's out. I get to go back in 2 weeks and then again in another 2 weeks, right before we move. Mark missed this appointment even though he could have gone to it since his flight was cancelled. He forgot I had one, even though I'd reminded him the night before. Turd...
Here's our first US picture. The white "stripe" on her head (on the left) is HAIR! And the dr said she has long toes. She definitely gets that from Mark. He has freakishly long toes. She gets the hair from him too actually since I didn't have any hair until I was about 2. The blob in between her head and foot is her little fist. 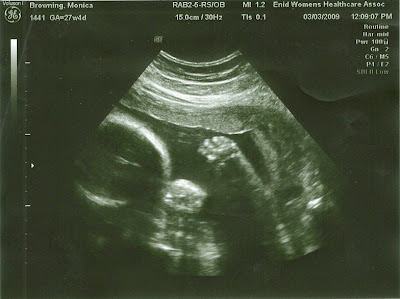 He didn't mean to print this picture, but I thought I'd post it anyway. It's of her little legs and feet. 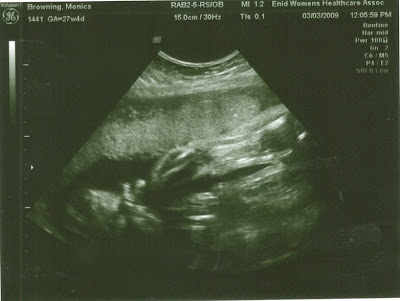 This one is kind of hard to see, but she was holding on to her big toes with her hands. The highest round blob is her hand and then you can kind of see her other toes below that and to the right. 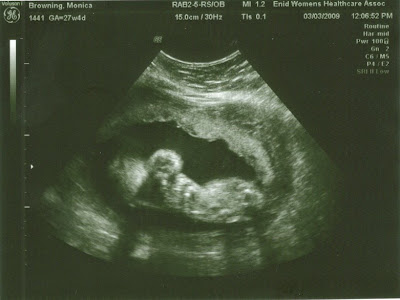 He said she's still breech and still in a piked position (her feet are up by her head). Her head is basically right by my ribs. I asked him what the heck I was feeling down low then, because I always feel her kicking (or something) in my pelvic area and on my bladder and he said he really didn't know. She's either bouncing - literally, on her butt- on my bladder or she's hitting it with her hands or she gets her feet down there somehow.

Here's my 28 week picture. I know you're all jealous of my stylish outfit and I'm available to give fashion tips any time you need them..... (By the way, I made those pants! They used to be huge and what do you know? Now they fit.) 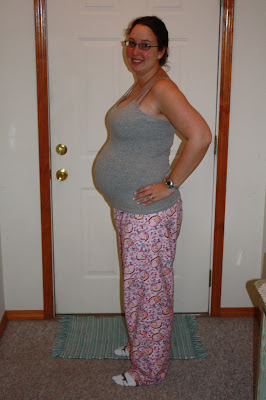 I finally got the guts to make the ring slings and the natural thing of course, was the test them out with the weina dog. Here's Ollie chilling in the sling. I think he rather liked it. I haven't 100% figured the slings out yet, because it seems like there's a TON of material. I don't remember my friends being that "bulky" when she showed us hers, but I used the amount of material the pattern called for, and I didn't even use a "bottom weight" fabric, which would have made it even heavier. Maybe I'm just not wearing it right. I'll have to practice some more I guess. (He was laying in it for a while, but I looked even more like a beached whale in those pictures, so I decided to use the picture where only 3 of my chins are showing instead of the others..) 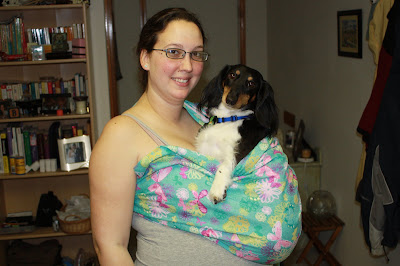 Only about 12 weeks (give or take a few days) to go. I'm SOO excited to meet her!

ah, yes, the ACTIVE baby. I know ALL about that. she certainly keep me on my toes! You look great, Monica. I'm glad things are going well. Don't worry about the breech thing ... some babes don't turn until the last week or so. you've still go plenty of time.

YAY! I'm so happy that you made yourself a sling. I'm not really sure why it would seem bulky, I can't really troubleshoot from the photo on the page. Do you have a few more? Also, how long and how wide did you make it?

LOL you crack me up.. double/triple chins, fashionista and all that jazz. :)

I had the complete opposite baby as you know- lazy and huge. LOL.

You look great :) I love Ollie in the sling. As you said... who better to try it out! I can't wait to see you in april! - Rachel