We found out yesterday it's only going to cost us around $170 to get our car "fixed". Turns out, there wasn't really anything else wrong with it, the spark plug wires were just connected wrong. I guess that was kind of an expensive lesson to learn, but so be it. I was fully anticipating it costing a good $1500 to replace the catalytic converter in the car, so I was MORE than happy to hear it was only going to be $170. Mark and I were EXTRA careful when we took the old wires off. We put tape on the engine and on the new ignition coil with numbers on it marking which wires were connected to where. And we double checked it 3-4 times before we unplugged everything and 4-6 times after we'd hooked everything back up. We came to the conclusion that the 2nd place we took the car to didn't hook everything up right when they took it apart. Mark wishes he would have messed around with it more before we took it down to OKC, but when you don't have a lot of experience working on cars, and your car is making horrendous noises when you turn it on and you're thinking the engine's going to drop out of it any minute, I think we made the right decision by letting the pros deal with it. I'd rather be safe than sorry. Mark said we get to go down to OKC when we pick it up and spend the "extra" $1200 we thought we'd have to spend on the car. =) (He was kidding of course.) (But we're still going to Target while we're there.) We're picking the car up on Saturday.

Today I had lunch with some friends that are moving to Phoenix around the same time we are. It's nice to know people when you move to a new city before you even get there. We had a good time talking and I'm excited to spend more time with them in Phoenix.

On my way home I stopped by Ross. I got a new maternity shirt (for $7) and a new purse (for $10). And then I got Abbie a few outfits.... They're so cute. I know I shouldn't even go in the baby section of that store but I swear it has some weird gravitational pull and I just can't help it. I got her this really cute onsie that says "Mommy and I agree: Daddy is charming". How can I not buy something like that?? Plus it was $3. Anything that says anything about "daddy" I have a very hard time turning down. I absolutely cannot wait to see Mark with our baby. He's going to be an amazing dad, just like he's an amazing husband. I couldn't really ask for anything better.

Other than that, not too much is going on here. I had one of my freak out sessions last night thinking about our families coming down after she's born and having house guests for weeks in addition to figuring out life with a newborn, but I think we came up with a solution to it and hopefully everything will work out. Mark said that now that I'm done worrying about the car, I had to find something else to worry about, which is pretty much true. =) It helps a TON though, that I feel like he understands how I'm feeling, even though he doesn't understand why I feel that way. That's been one of our biggest hurdles to get over and it's a big relief that we're making some progress. It seems to be more of a "we'll get through this" instead of a "you need to get over it" situation now. And I think too, I've chilled out a "little" and get over my freak out sessions more quickly now than I did before. Mark said it might have taken him 3 years, but he's got me figured out now. I'm just glad one of us has me figured out. =) 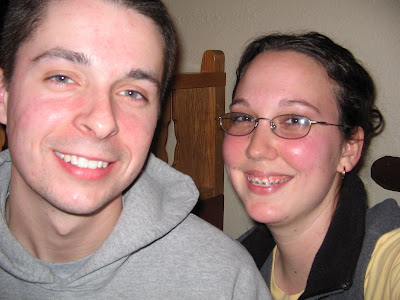