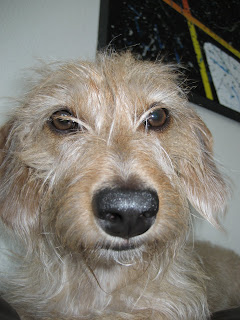 I got home from work today, and let our dogs out back so they could go potty, like I always do. We don't have a fenced in back yard bc we live in town home type things. Anyway, there's been this stupid road runner hanging around our house lately. I let the dogs out and Sadie took off after the stupid bird. I yelled for her to stop but she was all the all the way around the other side of our house. Oliver, thank God, just sat there. I chased after Sadie and was trying to figure out which direction she went, when I heard her get hit by an SUV. She was yelping and staring straight ahead. By the time I ran my fat ass over to her, she'd stopped yelping, but she was in a daze when I picked her up. The car kinda stopped but I just picked her up and ran back to our house. I was worried about Oliver coming around the side of the house too while I was inside. I went to let him in the back door (while still holding Sadie), and luckily, he was sitting there waiting for me.

I called Mark completely freaking out, telling him he needed to come home right now, and then changed that to meet me at the vet. I grabbed the dogs leashed and a phone book (to call the vet) and stuck Sadie and Ollie in the back seat and headed out. I couldn't remember the name of the damn vet so I called my co-worker who goes to the same vet and asked her to call the vet and tell them that Sadie got hit and I was on my way. I'm surprised she understood a word I said.

I got to the vet and my co-worker was waiting there for me, thank God, and she took Ollie in (who was along for the ride), while carried Sadie in. (On the car ride over, Sadie was sitting up and looking out the window, and seemed to be fairly okay, but one of her eyes started to swell closed some and one of her legs was bleeding.) When I tried to hand her to the vet tech, she tried to crawl back in my arms, which was a good sign, that at least she was with it enough to know what was going on.

After about 20 mins the vet got back with us (Mark got there right after I did), and said he thought she was going to be okay. She has a small cut on her back leg, which they might put 1-2 stitches in tomorrow, and her left eye was dialated, so he thought that could mean that she had a mild concussion or she could have bumped her eye. They're keeping her overnight for observation and I'm supposed to call in the morning for an update. Hopefully we'll be able to take her home tomorrow and she'll be fine. I'm just worried about the bump on her head... I don't know how serious it was, but the vet said he thought she'd be just fine, so that's what I'm trying to focus on.

I just feel so guilty - that I should have been able to stop her. And I think she got hit by the car when she was running back to me, because I was calling her since I didn't know where she went and she was coming towards me... I feel really bad about that. We got a stake with 2 cords to put in the back yard now, so the dogs won't go out unless they're on the cords from now on. It wasn't a problem before that damn road runner showed up, and this is the 2nd time they've chased it. Our next place is going to have a fenced in back yard, and hopefully Sadie will be around to play in it. She loves being outside.

I am so glad she is ok. That is absolutely terrible.

But it sounds like she is going to be ok?

This post freaked me the **** out. I wanted to skip it all to the end to make sure she was okay! It made me teary eyed! I am so glad she was okay! You poor thing! I bet a pregnant lady never moved so quick!

oh no, monica! sorry about the litte pupper. glad to hear she's going to okay.

i so miss our fenced yard. molly still goes out without a lead, but we don't live on a road. casey can't be trusted!

Hi Monica, HOpe she is doing good today! You will love having a fence! Hooking them up to the cable can be annoying but it makes me feel a lot better! There isn't much you can do when they see an animal llike that. Blossom never tries to get out of our fence and one day i didn't see the rabbit in the neighbors yard- she was around the house and across the street before i caught her! SO try not to feel to guilty-- it happens... no matter what you do to try and prevent it. Good luck! - Rachel

Oh my goodness Monica!!! How scary!! I heart skipped a few beats reading to make sure everything was fine. I hope she will be ok. Keep us posted. I'll pray for her.

I am glad to hear that your little Sadie made it home and is alright. It's too bad that it had to happen. Hopefully she gets better soon!