Yesterday I went to lunch with my friend, Jessica. Since she had gotten a sewing machine for Christmas, we wanted to go to Hobby Lobby after lunch to check out fabric and patterns. The Hobby Lobby here is in the same plaza as Ross. (For those of you from up north, Ross is a small department store that has things on sale for really cheap! Kind of like a big garage sale, except everything is new and most of it is at least 50% off of the original prices.) Anyway, I wanted to go to Ross to get Mark a new French Press since I broke the one I got him for his birthday while I was washing it. (Oops.) While I was there I decided to take a quick look at the baby clothes... which was a mistake. I should have known better.... I only looked through one side of one rack and had already picked out 5 things so I decided to stop there. It made me SOO excited though, to have this baby girl. One of the main reasons I wanted a little girl is to be able to dress her up in cute little dresses and stuff. As soon as I left Ross I drove to base to show Mark what I had gotten for our baby. I'm not sure he was quite as excited as I was, but he thought they were really cute too. When I got home I dug out all the other stuff we've gotten for her and took pictures of it so I could share them with you. I didn't take pictures of the stroller we have (see posts at the end of November for pictures of that) and I didn't take pictures of the pack n play and high chair his parents bought us bc they're still in the boxes and I want them to be moved in the boxes. I have a feeling if we weren't moving in two and a half months I would be majorly "nesting" right now. Here's what we have for our blueberry so far! (To see them up closer, you can click in the pictures and it should open up the picture in a bigger window.) 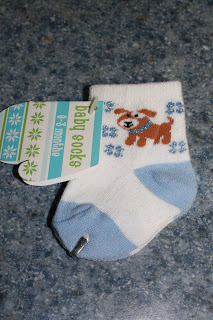 My cousin, Megan, sent us these. They're TINY! So cute! 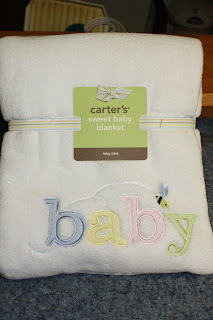 This blanket is the first thing Mark and I bought after we found out we were pregnant. It's SOO soft! 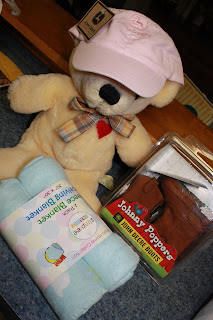 The bear is from my parents, along with the John Deere hat, the tiny boots are from my friend Gail, and the blankets are from my Grandma. 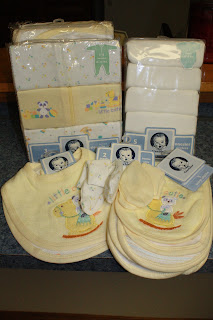 We got all of this stuff in a bag when we attended a baby class on base back in November. They also gave us crib sheets and more burp towels but I didn't take pictures of those. 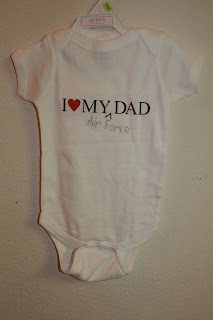 I think my sister got this for us, or my parents did. I can't remember who. My mom got us this little outfit. It's SUPER soft. And she also got us a silver feeding spoon. 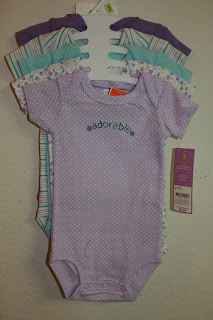 I can't believe she'll be this small! These are 0-3 mos size. 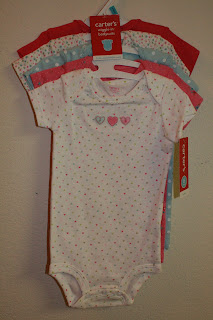 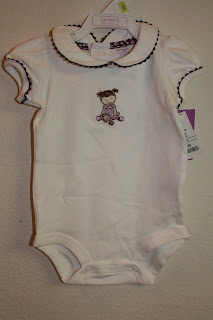 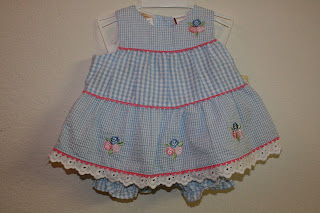 This is also 3-6 mos sized. I'll have to get her a little bonnet to wear with it, to protect her from the AZ sun! 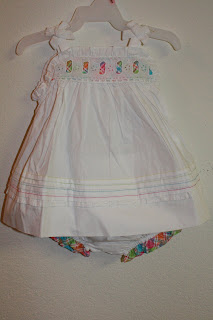 This one is my favorite so far. It's ADORABLE, and it's newborn sized! I figure it'll be perfect for keeping her cool when it's 120 degrees outside in June in AZ.
I'm proud of myself for actually stopping at those 5 things. I can't wait to take Mark back though and have him look at all the stuff too. My mom keeps telling me to not buy a bunch of clothes until after our baby shower, but I can't help it. The stuff is just too darn cute!! I've been trying to buy things that will be for when she's a little older though, or bigger I guess, since sometimes they're in 3-6 mos clothes shortly after they're born, so I've heard. Anyway, I'm getting REALLY excited to have this baby, and I just wanted to share my purchases!

Funny ... you say "I can't believe she'll be this small" ... she'll be SMALLER! Sierra was swimming in her 0-3 stuff for awhile. She switch to 3-6 when she was about 3.5 months old. She's still in 3-6 months now and she turned 7 months today. Guess it depends on the size of your baby.

Sierra also had that same white dress that is your favorite so far. Hmmm ... I don't think I have any pictures of her in it, though.

ha ha you crack me up.
Ellie, being a big baby, wears 3-6 month now. I am glad I bought clothes while pregnant, as I did not receive very many from people (that really surprised me).
I suggest TJ Maxx and Marshalls. I have bought most of my clothes there super cheap! If you see sleep sacks get them! I don't really like using onesies even though I have a bunch.

Monica, I just love the updates on your feelings, your pictures, your purchases for the baby girl, my favorite gift so far is the pink John Deere hat - can't guess where that came from. I pray that you continue to feel good and positive throughout the rest of your pregnancy. You fill me with joy telling your feelings and sharing your joy of having Mark for a husband - think he rivals mine - joy of the coming little girl. She will change your lives in ways you can only imagine now, but you will enjoy every bit of her. (Almost - dirty diapers was never a favorite) and dressing her in those cute outfits will be so much fun. Just keep on keeping us posted and I send my love to the three of you.