We had our 18w5d appt today. When we got there my blood pressure was still high when we got there (143/85), even though I felt pretty calm. We talked to Dr. Ferguson for a few minutes. I told him about my arms and legs falling asleep all the time, and he said that was normal, and I told him about my back pain, and he said "Just wait.. It'll get "better"." (By better, he meant much worse.) It's not too bad now though. Then he left and said he'd meet us in the ultrasound room and to wait for the nurse to come get us. He came back a few minute later with the blood pressure machine though, and took my blood pressure and it was 122/77!! WOOO-HOOO! I asked if we could just take a picture of that and remember it next time but he didn't go for it.

So we went over to the ultrasound room and got to hear the blueberry's heartbeat again, but I don't remember what it was... I don't think I even asked, since I was so excited to find out what it was. After digging around on my belly for a while, he said there was definitely an absence of testicles, so he was relatively positive it was a girl. The picture below is where the boy parts would be, and as you can see, there's nothing there. There were a few good shots of the baby's facial profile with HER hand (I almost typed "it's" again) just below her head that were really cute, but he didn't print those off. She looks kinda like a monkey in the first picture, but that's her eye. She looked much more normal in the other images. Hopefully we'll get a better picture next time. 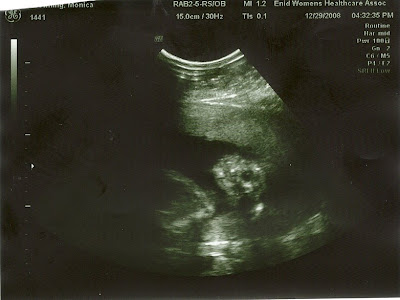 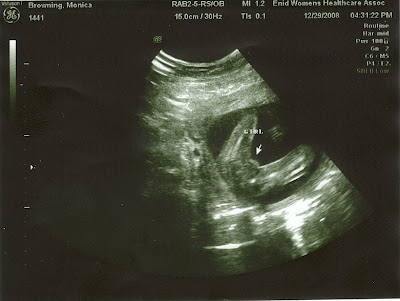 Anyway, Mark and I are SUPER excited that we're having a girl. I cannot WAIT to see Mark with his daughter. He's going to be wrapped around her little, tiny finger. My dad said right away that Mark will be great with a little girl and he'll be an excellent role model for her. It's nice to finally know a little more about our blueberry. My parents are also very excited about having a grand-daughter, since they have 2 grandsons. It will be good for Mark's family to have a grand-daughter/niece since they have so many boys in their family. Right now, we are leaning towards the name Abbigale Rose, although that's not 100% finalized right now. We have a few more months to decide.
That's our news for now! Hopefully we'll be able to sleep tonight!
(93 days left in Oklahoma...)

Congratulations! I know how much you wanted a girl! I had guessed she would be a boy. I am happy to be wrong. :) Ellie has Jeff wrapped around her finger hard core. I am sure you can expect the same with Mark. :) I never got any "nice" u.s. photos. Some people get awesome shots but she usually would not cooperate. The stinker.

I knew it!!!!! I'm soooo excited for your little girl. I cannot wait to meet her. Maybe I'll have a boy someday and we can have that arranged marriage for them:)
PS Girls rule!!!! Love you guys. Miss you!

the name is lovely.

yay for the countdown out of OK.