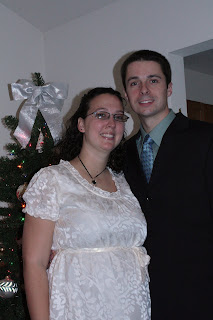 We went to Mark's squadron's Christmas party on Friday night. We had a great time visiting with friends and eating the wonderful food! I promised my mom we'd take pictures of our new outfits so I've included a few in this blog. I pooped out kinda early (10:30pm), but despite leaving earlier than most, we had a great night.

Saturday we headed down to OKC to go to a Cirque show. Before the show, we decided to eat at Joe's Crab Shack, since I was craving crab legs. I'd never even tried crab legs until I was in FL with Mark and he took me to the Crab Shack on Okaloosa Island, RIGHT on the beach. That was a mistake... I LOVE crab legs, so the whole time we lived in FL we probably had them at least once or twice a month. He's learned since then, not to introduce me to expensive foods. =) Anyway, so we thought it would be fun to eat crab again... Eh.. Not so much. The crab was okay, not the best we'd ever had. Mostly it was the atmosphere. We were so spoiled in FL since every time we had crab it was at a nice restaurant along the Gulf coast. Eating crab in the middle of OKC in December just isn't the same. We learned our lesson. That, and our waiter there was absolutely horrible! It must have been his first day or something. I hope to God it was his first day...

After lunch we went to our 6th Cirque du Soleil show, Saltimbanco. Cirque holds a special place in both of our hearts. We went to our very first one in FL in February of 2005. We were there with a group of people on spring break and we saw La Nouba. (That was before we were even dating, although I was calling him my pretend boyfriend, he just didn't know it yet.) Then we went on a graduation trip after Mark graduated from MSOE in May 2005, and Mark, his brother, Ryan, and I went up to Montreal, Quebec and saw our second Cirque show, Corteo. The next two we saw were in Vegas on our honeymoon in June 2006. There we saw Zumanity and Mystere. In April of 2008 we saw Ka in Vegas also during my work trip. And then 2 days ago we saw Saltimbanco. If you've never seen a Cirque show, I would HIGHLY recommend it. They are amazing, and not at all your typical "circus". They're all kinda similar, as in - you know you're watching a Cirque performance, but they're all vastly different too. We both really enjoyed Saltimbanco. They did some amazing tricks, and the clowns were funny and the audience participation was entertaining. We had a great time.

After the show we went and finished up some of our last Christmas shopping and I admired pan sets at Williams and Sonoma. Someday I'll be able to afford a $1200 set of pans, but not anytime soon, so I just like to go look at them. We also checked out Mimi Maternity, since I would like a few "dressy" maternity shirts, but that place was so un-Godly expensive I didn't buy anything there. I refuse to pay $40 (and that was HALF OFF!!) for a shirt! Most of my entire OUTFITS don't cost $40. We split an entree at Olive Garden for dinner and decided it was a good thing we didn't live closer to OKC since our dining out budget would probably need to be tripled. (Just on Saturday we spent almost $60 on food and we shared a meal at both restaurants we ate at!) After dinner we stopped at Target (I miss Target) and I found a cute maternity shirt for $10 and we got gifts for our dirty santa game with our family and a few gifts for our nephews and then we headed home. It was a great day overall. I love going on dates with Mark. We talked a lot throughout the day about how our life will change when we have this baby and how we thought things would be different. We're so excited, and a little nervous, but more excited than anything. We keep talking about how next Christmas will be so much fun having a 6-7 month old. We are truly blessed. 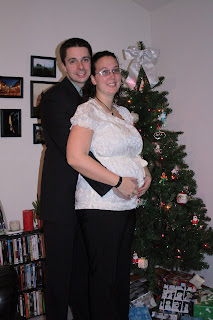 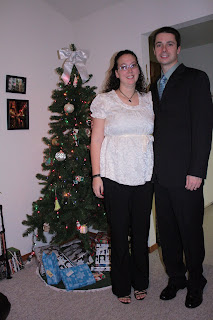 I pretty much ordered all my maternity clothes online at motherhood maternity. I shopped the clearance section there as well.

Awe, look at your little baby bump! Love that shirt! I am actually about to sell all my clothes. Too bad we don't live closer.

I adore your beautiful baby belly ... um, do you think that we are around the same size? Because I have maternity clothes that you can totally borrow! (I want them back when you're finished, though, because we will eventually have a #2). Mine are mostly size "medium." Also motherhood maternity is more affordable than Mimi and Old Navy has some cute maternity things as well.

I realized when I read those last couple lines, that your little one will be almost exactly 1 year younger than Sierra. She turns 6 months old tomorrow and will be 6.5 months for Christmas. I can't wait for you to meet her!