Catching up on our pregnancy 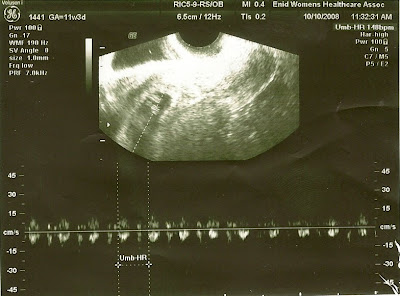 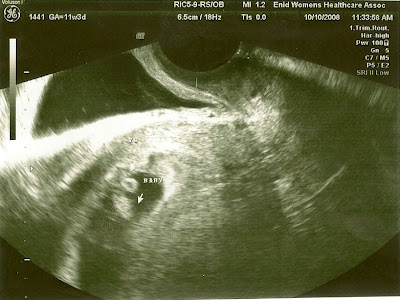 Since the cat is finally out of the bag with most people, I'll post the few entries I was saving for after everyone found out we're pregnant. Here they are.

So we’ve known we’re pregnant for 4 days now, and it’s still hard to comprehend. I just keep thinking “I’d better not get my hopes up yet, incase something goes wrong”. All last week when I was home, I had a pretty strong feeling that something wasn’t normal. I kept telling my mom that I thought I could be pregnant and she kept saying a probably wasn’t because if I was, I would definitely know. So then I began to doubt myself, and think that maybe I wasn’t pregnant, since I didn’t know for sure. I wanted Mark to be the first person to know, so I didn’t take a home pregnancy test until I got home from my trip. I really had to pee when we were driving back from OKC, but I was holding it so I could take the test when I got home. After I snuck up on the weinas when we got home, I took the test, and it was definitely positive! A little while later than night, I took another one, and it was also positive, so by that time, we were pretty sure I was pregnant. (I’ve taken tests for like the past 6 months and all of them were negative.) Monday afternoon I went to the dr for a blood test and it came back positive also.

We’re REALLY excited about this. I’ll be nervous until we get out of the first trimester though. I’ve heard once you can hear the heartbeat, the odds of having a miscarriage decrease quite a bit. Until then, I’ll probably worry quite a bit about that. I haven’t really “felt” pregnant. I’ve had some minor cramping occasionally, but that’s about it. So far, so good, but then again, I’m only 5 weeks along today. Our due date is May 27 and we’ll be 32 weeks and 2 days when we start our move to Phoenix. Good times! We’ve been trying to get pregnant for 7 months, and I’d gotten it into my head that it was just going to take us years, so I really still don’t believe that we could potentially have a baby in 9 months. Crazy! Mark is very excited. He talks about what life will be like with a baby all the time now. It’s adorable! He’ll start F-16 training 15 days before we’re due though… so we’ll see how that works out!

Lately I’ve been really tired. I’m ready to go to bed by 9pm every night, but I’m usually wide awake by 7am. (And I get up at LEAST 3 times every night to pee.) Then usually by the afternoon I’m ready for a 1-3 hour nap, although I have yet to take a nap and wake up feeling refreshed. Usually I still feel pretty groggy and half the time, if Mark didn’t wake me up, I’m fairly sure I’d stay asleep until the next morning. It’s not fun being tired all the time, and it’s even more not fun taking naps and feeling even more tired when you wake up than when you laid down. Oh well. I’m sure this LO (little one) will be worth it.
This morning I had my first bout with morning sickness. I didn’t throw up, but I felt pretty crappy all morning. Half the time though, I can’t tell if I’m hungry or queasy. I’m hungry ALL the time. I’m usually snacking or eating about every 2 hours, although I’m trying to eat a lot of fruits and veggies so I don’t gain too much weight. Thankfully, I have the most amazing husband ever, who 100% picks up my slack when I’m not feeling good. This morning he cleaned the entire kitchen, finished 2 loads of laundry, and folded it all and put it all away, and made me lunch. He’s pretty much the best ever, and I cannot WAIT to see him with our baby. I know he’ll be an absolutely AMAZING dad. I just wish I was further along! Time seems to be dragging on, ever since we found out we were pregnant! If I was like 14 weeks along, and showing, and felt pregnant, it would be fun (and hopefully all the morning sickness would over by then too!)

So I'm a HUGE wuss when it comes to doctors appointments. I have MAJOR white coat syndrome. I had my first ob appt today at 10:20 and all morning I literally felt like I was going to throw up. I couldn't fall asleep last night and when I finally did, I couldn't stay asleep. I was also really nervous bc I've never had a male ob/gyn, so that was a first for me too.

So I got there and my blood pressure was 158/89 and my heart rate was 105bpm. Geesh. At least now Mark knows I wasn't kidding when I said I was REALLY nervous. =) We got to see the baby for the first time, and see AND hear the heartbeat, which was 148bpm. I was excited to hear it also bc I didn't think that happened until 12 weeks or after. He estimated the due date to be around May 29 or 30, but he said that we would be able to give us a better estimate at the next appt.

We're really excited now. It seems so much more real now that we actually saw the baby and the heartbeat.
Oh, and they took my blood pressure right before I left and it was 123/83 and my heart rate was down to 82 bpm. =) Our next appt is November 11.