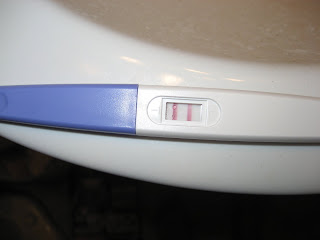 Since I forgot to post this before, I decided to post it now before I forgot. This is the first test I took after I got back home from being with my parents for a week. =)

This week I've been slightly freaking out a bit. Right now, I know more pregnant people than non-pregnant people. Most of them are ahead of me, a few of them are behind me in their pregnancies, but I've been hearing many of them say how they feel SOOO pregnant. ..... That kinda freaks me out because in all honesty, I don't really feel all that pregnant. I seem to be more tired than normal and I'm hungry pretty much all the time, but sometimes I wonder if that's just all in my head. My boobs don't seem to be hurting as much, and I don't get my little cramps as often either. My clothes still all fit, and I know many people who's clothes were getting tight around 7-8 weeks. I'm at 9 weeks, and I haven't noticed a difference. My lower, middle back, like below my tailbone, hurts like heck, pretty much all the time, but I have no clue if that's pregnancy related. I assume it is, but I really don't know. I know I'm mostly worried bc one of my good friends recently had a miscarriage, and I'm scared that I'll have the same. It seems like there's more of a risk now that almost everyone knows for some reason. I'm sure it's all in my head, but I'm a professional worrier, so I've been putting my skills to good use lately.

I've also been worrying about what's going to happen in April and May of next year. Yes, I know that's still half a year away, but as I said, I'm a professional. Mark is done with his training here at Vance on April 1. However, we cannot move until around April 8 because he has to have landing currencies within 45 days of his start date in Phoenix (May 21). If we move around the 8th of April, I'll be around 34 weeks pregnant. I don't want to have to drive in a seperate car from Mark to Phoenix, so we originally were going to try to get a tow dolly or bar so we could tow the Jetta behind the Explorer. (U-Haul and those type places won't rent trailers or dolly's to Fords.) My dad wanted us to get something with brakes though, and even for a used dolly, it's like $800. So luckily my mom has agreed to drive the Jetta for us to Phoenix so I can ride with Mark. It'll be nice to have her there with us anyway bc she can help us find a place to live and maybe even help us get settled in some, depending on how long she can stay. Right now, the plan is to have the movers pack up all our stuff on the 1st of April, and then go home to my parents house the 2nd - 7th of April because my (our) mom(s) want to have a baby shower for us on April 4th. Then my mom can ride back to OK with us and we'll probably stay there for a day or 2 until Mark can get his flight done and then head to AZ after that. That's going to be a LONG time in the car though. It's a good 10-11hrs from my parents house to Enid, and then another 16+ hours from Enid to Phoenix. Ugh. Add a pregnant lady and 2 weina dogs into the mix and that's going to tack on at least another few hours with as many times as we'll have to stop.

I got my flu shot today. Mark got his last week, so hopefully I can avoid the flu this winter. (I had it twice last year, and it was NOT fun.)

Other than that, we went back to Chicago for Dave's wedding last weekend. It was good to see our families and Dave and Amy. It took us 13.5 hrs to get home though, which is not our idea of fun.

One more picture for you. These aren't all pregnancy tests, most of them are ovulation predictor tests. 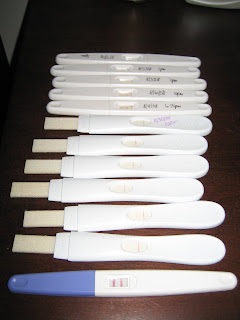 woooOo!!!! I was behind on reading your blog since I have been prepping for our little one's arrival. YAYYYYY! Finally! I am so excited for you. Any questions for me ask away. My tailbone didn't start to hurt until the last week or so and it has not been fun!