Last week – Tuesday to be exact – I decided to take a pregnancy test.  For the past few weeks I’ve been going through the whole game – am I actually feeling these pregnancy symptoms or not?  The mind can play some crazy tricks on you and so I didn’t know if I was feeling pregnant because I kind of wanted to be, or if I actual was.  Part, or a lot, of me thought that there was no way on earth that I actually could be pregnant.  This was our “practice month” and we literally tried once.  One time.  With Abbie, it took 8 months.  With Jamison, it took a full year and progesterone and Clomid.  The whole plan was to try to get pregnant over the summer so we can have #4 by Dec 2017, when Mark will probably get out of the military (and we lose military insurance).

Around 10am, I decided to take one of the tests I’d just picked up at the Dollar Store.  I looked at it for a few seconds and saw the control line show up, so I set it down and figured I wasn’t pregnant or it was too early to test.  For whatever reason, I decided to go check it “just in case” a few minutes later and I about passed out when I saw a faint line in the test line.  It’s that feeling of excitement and shock and “holy shit” that hits you all at once.  I thought maybe it was wrong because it was a dollar store test, so a few hours later I took another one and that was a very faint positive too.  Two days later I took another one and it was a tiny bit darker than the first and on Saturday I took another one and it was a little bit more dark.  So my HCG’s are going up, which is good. 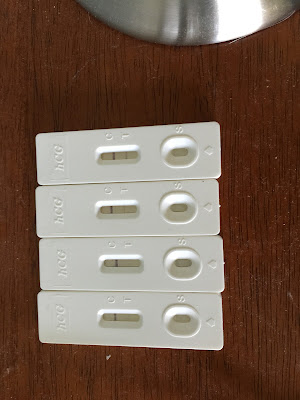 I had a pretty bad headache and asked Mark to come home a few hours early from work, partly because of my headache and partly because I couldn’t wait to tell him, but of course he didn’t/couldn’t.  But when he did get home I think he was just as shocked as I was about the whole thing, and excited too.

Of course we’re excited about this, but if this baby sticks, I’ll be due mid-December.  Ben’s birthday is Dec 8th, so we’ll have 2 birthdays pretty darn close together.  I guess we were hoping to have another baby some time next summer, but it’ll also be nice to have him/her in December and then be able to do more camping next summer.  We are supposed to go camping in Monterey the week of Thanksgiving this year, but I’ll probably cancel that trip once I get into the second trimester, or move it to spring break or something.  I still have to go do the whole pee test on base to get the referral to an off base OB and since I have Jamison’s 1 year appointment on the 29th, I’m planning on just doing it then.  I guess OB’s around here don’t usually see you until 11-12 weeks and I’m only 5 weeks right now, so we still have a ways to go.


So far I’m feeling pretty good.  A little more tired than usual, sometimes a little crampy and my boobs feel weird sometimes, but nothing unbearable.  Mostly I’m just hoping this baby sticks.  It’s bitter sweet though.  This will be my last pregnancy (unless we have a pretty big “oops”) so I’m trying to enjoy it as much as possible and not spend the whole time worrying about things out of my control.  We probably won’t tell the kids for a while yet, and we’re not making it public knowledge until much later as well.  I’ve told my parents and a handful of close friends, and one of my cousins and I might tell my 101 year old grandma soon, but other than that, we’re going to wait a bit to tell everyone else.  I want it to be our secret for a while and I want to make sure this baby sticks before we broadcast it to everyone.  Although with this being #4, I’ll probably start to show pretty soon.  Not to mention Jamison isn’t even a year old yet…  He’ll be a year next week but part of me feels like I’m robbing him of his “babyhood” a little bit.  If everything goes well with this pregnancy, he and the new baby will be about 19.5 months apart.  Abbie and Ben are 31 months apart (2.5years), Ben and Jamison are 40 months apart (3.5 years) and Jamison and baby #4 will be less than 20 months apart.  I guess we’re getting to see a few different year gaps which is fun, and it’s also good because I’ll be 36 when I deliver this baby.  I wouldn’t want to be much older. 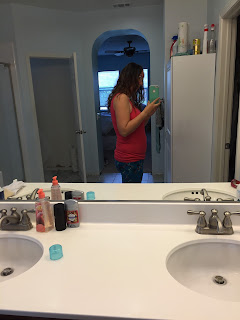 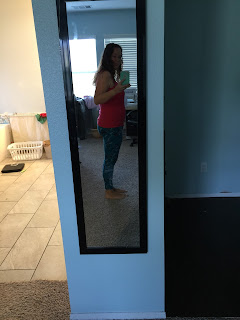 So fingers crossed that this baby sticks!!  (And toes crossed that it’s a girl!!!  Although I’ll be thankful for any healthy baby.)