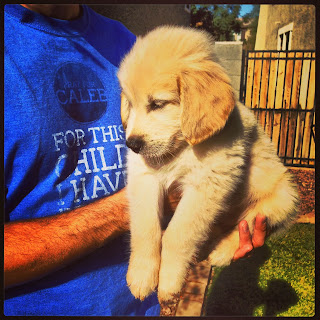 I grew up with Golden Retrievers, and in my opinion, there aren't many family dogs that can top a Golden.  They are friendly, loyal, smart and great with kids.  I love our weinas, but they are annoying, loud and really yappy, which drives me absolutely insane, more stubborn than any other animal I've ever met and not all that great with the kids.  They tolerate the kids, but Oliver especially, views the kids as competition.  I don't think my kids want for much, and they're not lacking anything, but I would love for them to grow up with a "real" dog.  One that they can enjoy and more importantly, one that will enjoy them.  My kids know how to be kind to animals and they are gentle with our weinas, but Ollie still wrinkles his nose any time Abbie gets near him.  And he growls if she touches him, which she completely ignores, but still.  I wouldn't consider Dachshunds, especially ones that didn't grow up from puppies with small kids around, child-friendly, at all. 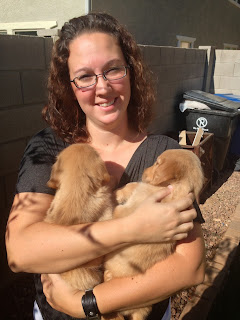 So I began looking into Golden's in AZ and had quite a shock when I realized that to get a decent, pure bred Golden, you had to fork out at least $1500.  Apparently I'm in the wrong business.  I was SHOCKED!  I know that my parents never paid more than $500 for the Golden's we got in WI and those were show quality dogs.  I'm not looking for a show quality Golden, but I would like a nice representation of the breed, at least.  And I don't want to get a dog from a "backyard breeder".  I don't mind if someone has a small breeding business in their back yard, I'm referring to someone who has no clue about breeding or bloodlines or conformation or anything like that and just throws 2 dogs together and ends up with puppies.  The ones pictured above are adorable puppies, but the lady selling them wasn't a breeder.  She just thought she could have an intact male and un-spayed female in the same yard and not end up with puppies....  So this was her 2nd litter because apparently she didn't learn the first time, or she learned the first time that she could sell these dogs for $500 each and make a nice profit for not a whole lot of work.  Not the kind of "breeder" I want to get a dog from.  And if it had just been looking at the puppies, I might have been tempted.  But she had both of the parents there and they were what I wasn't impressed with.  The mom looked like a mix between a Golden and Collie of some sort and the dad was huge, but he didn't have that great of coat or conformation and he wasn't well-behaved at all. 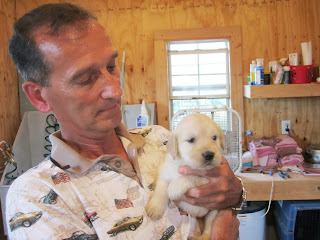 There is a breeder near my parents house in MO that breeds the cream colored Golden's, which is what I would want.  My parents went over there to check out the 2 litters of puppies they had there.  These dogs are a lot better quality than the ones that we looked at.  And they're $700.  Cream colored Goldens in AZ sell for $2500-3000, no joke.  And that is with limited registration papers because they don't want you breeding them without their consent.  As much as I love Golden's, I can't justify spending that much money on one. 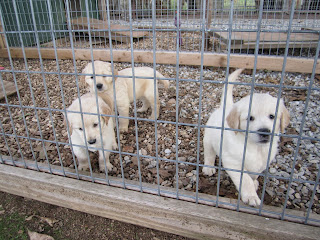 I have had many friends tell me that I should adopt a dog from the humane society or a rescue.  I have looked into that, and did consider it, but it just doesn't make sense to me right now.  If you adopt a dog under 2 years old, it is a $400 minimum adoption fee.  You know nothing about the dogs background or bloodlines (if hip dysplasia or something else that Goldens are known for).  I would like to get a puppy under 10 weeks old so I can train him myself and so he can be acclimated to our kids at a young age.

We'll see.  I don't at all have Mark convinced that we NEED another dog yet.  But maybe in a few months when I can start making more money.  I definitely miss having a big dog around.

We're planning on getting a puppy (either a lab or golden) when we move back to the states soon, and I've been researching as well. I also had no idea they are so expensive!!! My husband does want the dog for hunting, so I'm thinking we'll be spending a big chunk of change on one. Good luck!!!