Hard to believe that in four months our little dude will be TWO!  So crazy!

Ben has changed a lot in the past month.  His vocabulary is really picking up well.  He’s trying to repeat almost anything we say, and he’s starting to put two or more words together on his own.  “Help please”, “more water”, “All done.  Get down.”, etc.  He loves trying to figure things out, and those stupid buckles on all the high chairs at restaurants are his favorite.  He gets frustrated though and then he screams if he can’t get them together or apart, so that’s a little bit trying at times.

Ben full on runs now, and he’s starting to jump.  He doesn’t fully get off the ground but he definitely tries to jump, especially off of very short stairs.  And he likes to climb now….  I’ve come out of the bathroom twice to find him on the middle of our kitchen table.  Yay.  Abbie never climbed but Ben loves to.  And he loves to go for bike rides and any time he sees a bike – ours or ones parked outside of businesses – he says his version of “bike ride”, which sounds pretty good for him.  We’re slowly getting him to not throw his food all over the place when he’s done eating and now we can give him a look and tell him no and he’ll put it where he’s supposed to.  He’s definitely in that testing stage now, where he knows he’s not supposed to do something, but will do it anyway and watch you the whole time he’s doing it to see what you’re going to do.  Luckily he’s not nearly as persistent as Abbie was at this age, so you can tell him no a few times and then he’ll stop.

Ben still LOVES animals.  There is a tiny dog named Charlie, at Abbie’s school, and Ben goes looking for her every time we are there.  When he finds her, he crouches down next to her and says “Hi” in a really high pitched voice.  It’s really cute.  He talks in his funny, high pitched voice any time he sees any animals.  There are guinea pigs and a rabbit in Abbie’s classroom also and Ben goes in and talks to those the same way.  The little guy just loves animals.

Ben is still totally fascinated with planes, which really worries me.  He just LOVES them and often points them out and shout “PAIN!!!!” (his version of plane") when he sees them.  And when we go to Mark’s work, he just stands in front of the big jet photos in awe, with his little finger stuck out pointing at them.  It’s like it’s in his blood or something, although I’m not sure Mark was that interested in planes at this young of an age.  It’s very cute and it’s fun to see him so excited, but I don’t know if I can handle being married to a military pilot and also have a son as a military pilot also…  In a way I think it would be easier to have a son as a pilot when you haven’t lived the life and you don’t know exactly what is involved with flying these jets and some of the dangers.  But since I am married to a pilot, I have a better idea than someone who isn’t married to “the military”.  Fingers crossed that he finds many other interests in the years to come. 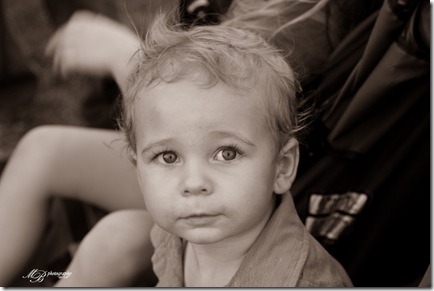 Overall, this little guy is a lot of work, but he’s a lot of fun too.  His smiles are infectious and he’s always so happy to see you and says “HI!!” as soon as he does.  He’s at a fun age and I wouldn’t trade him for the world!

It's so funny comparing my two around this stage as well. Wilson was far behind in his vocabulary, but jumping and climbing and getting into everything!

Can't believe our babies are getting closer to 2 years old soon! CRY!

Oh my goodness does he look just like your husband these days! I can't believe he is almost two!!! I love to hear about him growing though!