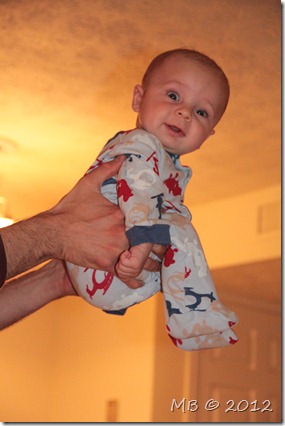 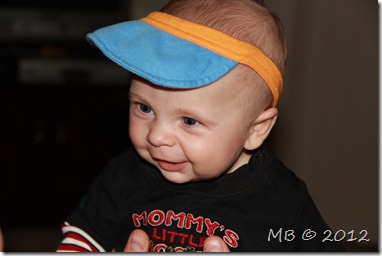 I got him his Rotavirus oral vaccine and his PCV shot.  He was all smiles for the oral part but obviously didn’t like the shot too much.  He got over it quickly though.  After his shots, we went back downstairs to the family practice department.  We got checked in, and then they sent us back upstairs to see the doctor because apparently he works in a different department.  ??  The nurse called us back and didn’t even know we were there for a well baby check, so then we had to go back downstairs to get his measurements because they only have infant scales in the peds department.  After we got his measurements we had to go back upstairs to see the doctor, but not before they put us in a room with a treadmill.  ???  It was rather strange to say the least, but whatever. 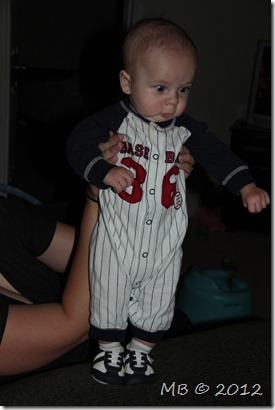 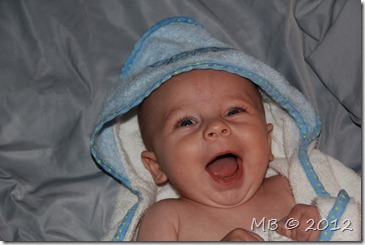 Ben has also seemed to turn a corner with his sleep (THANK GOD!!!).  I have no doubt that we’d all be sleeping better if we weren’t sharing a room right now, but we don’t really have any other choice.  We’ve started putting him to bed at 8:30pm and sometimes he’ll wake up and need his paci once or twice during the night.  He’s usually needing a bottle between 4-5am and then I can usually get him to go back to sleep until 8-9am.  So not too bad.  Much better than him waking up every 2 hours or more like he was when we first got here.  He takes a nap sometime late morning from 30min-1hr and then he usually naps for at least 2 hours in the afternoon and then takes a short nap in the evening.  We’re definitely getting his schedule down, and he’s getting more predictable, which is another reason that this is one of my favorite ages. 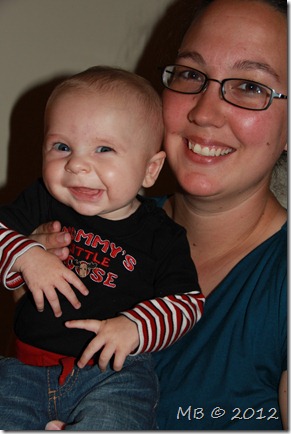 OH MY GOODNESS.
That last picture.. he is so stinking cute! I'm glad to hear he is growing too! :)

That last photo of you both together is beyond precious. Oh my what a great smile he has!!