Today we woke up to Abbie, who had crawled out of the pack and play (she got one of the sides to collapse), onto the bed next to it.  She was having a grand time playing with her puppy and pony. 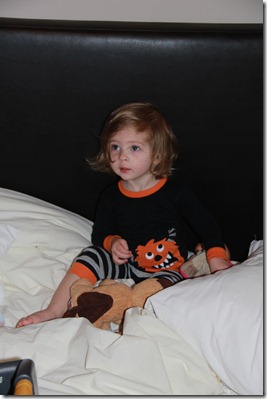 Today we decided to head to the L’Eixample area and follow one of the tours in the Frommer’s book we’ve been using.  There were 2 highlights to my day.  The first was on our way to the L’Eixample neighborhood via the metro.  I was carrying our camera around my neck, and spotted a few pick-pockets.  This time I saw them and Mark didn’t, which I was pretty excited about.  These guys are not discreet at ALL.  I saw 3 of them walking towards me, along with a BUNCH of other people, but for some reason these 3 stuck out.  And then I saw one of them eye my camera, point at it, and then turn to his 2 buddies and point at it.  They walked by, and I turned around when they were about 15 feet past us and watched all three of them do a 180 degree turn and follow us.  There are escalators next to all of the staircases in the metro, and one of the dudes tried his hardest to get right behind me on the escalator while the other 2 took the stairs.  I was busying pointing them all out to Mark, and he grabbed my arm and pulled us out of the escalator queue and made the one dude go up the escalator before us.  I pointed out the other 2 dudes to Mark and by that time, they all knew we were on to them, so by the time Mark and I got to the top of the escalator, all 3 of them were heading back down the staircase.  Obviously these guys aren’t professionals, because if they were, they’d never make it THAT obvious that they’d spotted something they wanted.  I mean, the guys eyes practically bugged out of his head when he saw my camera.  He lit up like a friggin Christmas tree and then not at all discreetly pointed it out to his friends.  Idiot.  Note to self: do not carry expensive camera around your neck while in the Barcelona metro system.

So the second highlight of my day was this AMAZING fabric store we passed.  Well Mark tried to pass it, but I managed to drag him in.  I could have spent HOURS in this place.  But I limited myself and only bought 2 meters of quilting fabric to use as backing for a quilt I want to make Abbie. 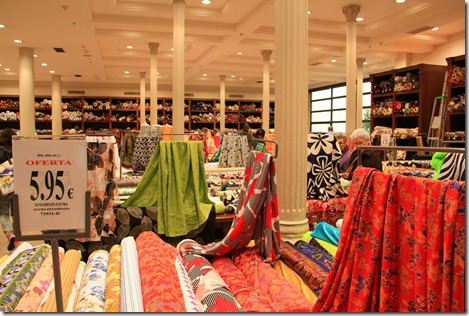 (Every wall was lined with shelves of fabric like this.) 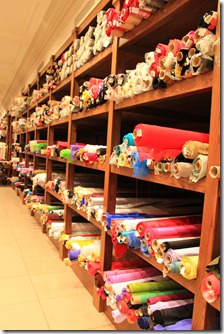 The L’Eixample neighborhood was neat.  I loved the tree lined streets and looking at all the neat balconies on ALL the buildings. 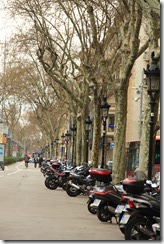 This is Passatge de Permanyer, which is a small street tucked in along all the tall buildings that was lined with townhouses and English gardens.  It looked REALLY out of place in this neighborhood, but it was neat to see and fun to imagine who lives in these places. 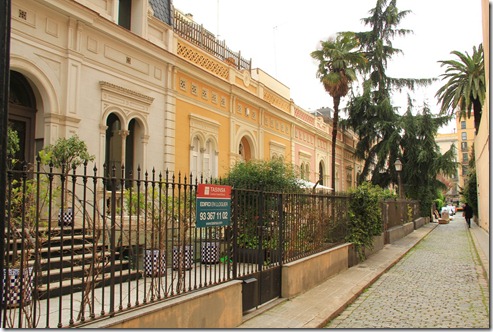 Most of the buildings are either ornately decorated with paintings or have decorative balconies all over them. 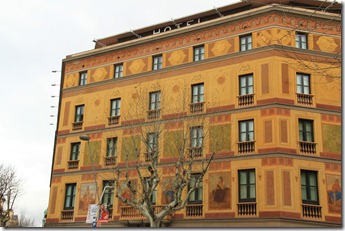 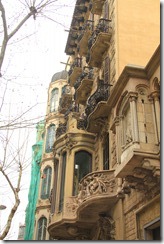 Abbie’s been a trooper on this trip.  She’s quite the little traveler, which is good considering she’s not even 22 months old and she’s been in 8 different countries.  She’s pretty observant and she’s getting more involved in what’s going on around her now, instead of just being a passenger.  She’s always pointing stuff out to us and often asks “EE Zaht?!”  (What’s that?)  And when Mark is wearing her in the Ergo and I get too far ahead of them she’ll say “That way daddy.”  Or “Hurry up daddy” or “come on daddy”.  It’s pretty funny and she’s definitely good at bossing him around. 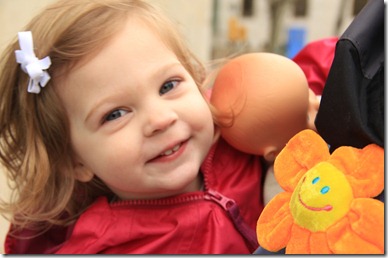 I noticed some of the major streets have these areas for the motorcycles and scooters to stop ahead of all the other traffic.  I guess that’s so they can get a head start?? 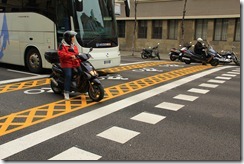 We passed this little courtyard that was connected to a church.  It was really pretty and I got a lot of good pictures in here.  And Abbie enjoyed looking at the chickens. 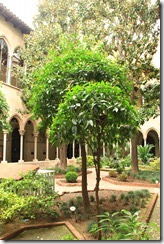 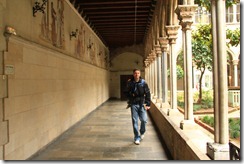 We went by this church and stopped in it to check it out.  However, it was REALLY dark in there and you pretty much couldn’t see anything, let alone all the details.  I took this picture after messing around with the settings on my camera for a while (no flash) and we were surprised at how ornate the church was.  We couldn’t see that when we were in it. 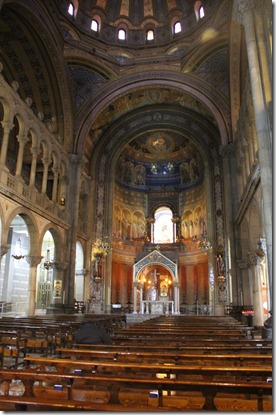 This park was neat, but it was raining pretty good when we went by it. 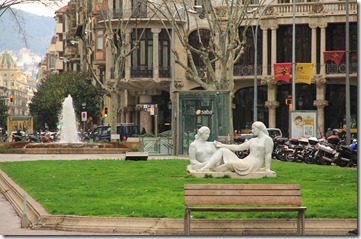 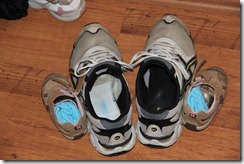 So I wish I could tell you all the fun things we saw today, but unfortunately we didn’t leave the apartment for more than 30 minutes…  I feel like absolute crap.  I am ALL congested, my ears hurt, my head hurts, my eyes are starting to get congested and they burn and hurt.  I can’t hear very well, I can’t taste anything, and I just feel gross.  Abbie had a fever of 103.8 last night, and her temp as been over 101 all day today, so she’s obviously fighting something too.  She’s been acting completely normal and is playing and having a good time running around, but she’s coughing, her nose is running and she’s definitely not healthy.  And now she has a small rash.

So I tried to sleep off whatever I have today (didn’t work), and Mark and Abbie played.  Here’s a fort they built together.  Abbie LOVED it. 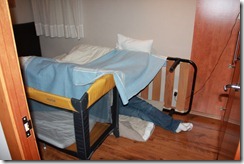 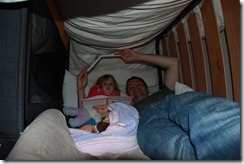 This evening we went out to find something to eat, but ended up just going to a pharmacy to get me some meds and then came home and Mark made us dinner with stuff we’d gotten at the grocery store the other day.

I’m bummed that we didn’t get out and about today because there’s still a lot we want to see, but it stormed and rained all day today anyway, so it wasn’t exactly a great day for site seeing.  I’m really hoping we can get out and see a few more things tomorrow before we head home.  Unfortunately I think I’ll remember Barcelona as the city I felt like crap in, even though this really is a great place.

Just read up on all your Spain trip days. Minus being sick it sounds fun and your pictures are awesome! That fabric store also looks amazing! I would ahve stayed in there for hours with you. Hope everyone is on the mend. :)