My mom used to call Oliver our “illegitimate weina” because Mark bought him for me before we were married.  He truly is our first child and I had no doubt Mark was going to be a great dad by the way he was with our puppy (among other things). 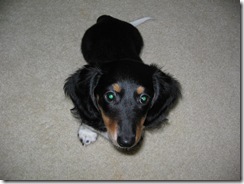 Ollie got his teeth cleaned today.  Or maybe I should say “pulled” since they ended up pulling 17 (SEVENTEEN?!?!?) of his teeth.  I haven’t gone to get him from the vet yet because they wouldn’t let me pick him up before 3:30, so I’m not sure what to expect.  I think he’s going to have like 2 teeth left.  Poor guy.  I felt sick to my stomach when she told me they had to pull that many and asked if there were going to be any left.  I called Brittney to vent about it and she, being the jokester she is, said well I guess you don’t have to worry about getting his teeth cleaned anymore since he won’t have any left.  HAHA!  I’ll admit, I laughed at that.  His one and only tooth cleaning…  The dog isn’t even 6 years old yet, and he’s going to be a toothless weina. 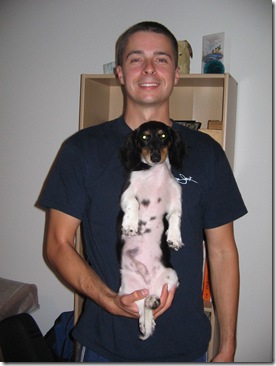 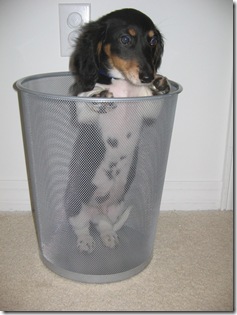 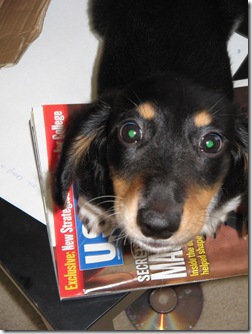 I have decided that I’m just not a little dog person.  I grew up with Golden Retrievers, and I must prefer the bigger, more independent dogs.  Don’t get me wrong, my little weinas are like my kids, but I don’t think I’ll ever buy little dogs again.  They’re so …. needy.  And I don’t ever remember anyone brushing the Golden’s teeth when I was growing up, so I guess I never realized how important it is to brush your dogs teeth.   Guess I’d better start brushing Sadie’s more often so she doesn’t end up toothless also. 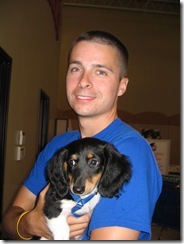 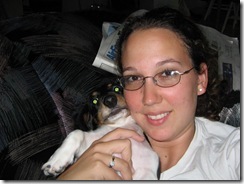 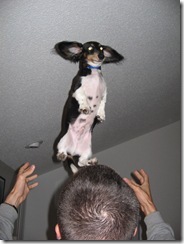 I’m off to pick Ollie up from the vet now.  Hope he doesn’t look too funny without any teeth and hopefully he recovers quickly from having so many pulled. 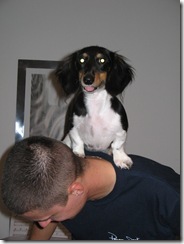 UPDATE:  I guess one of the advantages to having crappy internet is that I can write an update even though I’ve tried to post this 3 times already.  Ollie is home and the poor guy is hurting quite a bit.  He’s just laying around crying and whining and acts so out of it.  They gave me pain killers and antibiotics for him so hopefully those will make him feel better soon and he’ll perk up.

Oh my gosh i have just never heard of such a thing in a young dog! Blossom needed her first teeth cleaning at 5 years old, and needs them yearly because she wont chew on bones to help clean her teeth, but our other dogs are all pearly white, just from chewing. I hope Ollie feels better soon!! Thats still so crazy tho... Princess has had 4 teeth pulled (2 different times) but they never pulled any surrounding teeth- just put her on antibiotics for a bit. Good luck with the lil guy!

I feel so bad for Mr. Ollie. When you called me and told me that they had to pull all those teeth, I have to be honest, I didn't think dogs had that many teeth. Poor guy. Like I said, I know my friends moms dog, also a weina, had to have all hers pulled because it was causing many other problems with her stomach and bowels. She was older than Ollie, but at least you won't have to worry about other issues like that down the road. Glad I could make you laugh at the horrible situation, I was totally being serious, then you busted out laughing, I couldn't help it..I had to join in. Hope he is recovering well!