“Happiness is an attitude.  We either make ourselves miserable, or happy and strong.  The amount of work is the same.”  ~Francesca Reigler 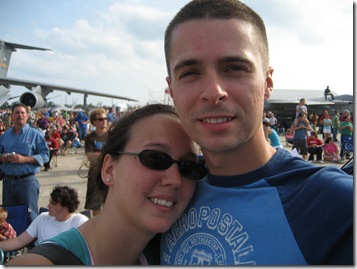 Mark has left on another TDY.  This will be our longest one yet, but as I’ve said before, I can’t complain too much because I know many people endure MUCH worse separations than this.  But it’s still hard and I won’t wash his pillowcase until he comes home, just in case.

Last night Abbie was an absolute holy terror.  She’d seriously never been that bad and I’m not quite sure what was going on.  She didn’t really want to have anything to do with Mark, and wanted my undivided attention for about 5 hours straight.  The three of us were sitting on the couch, me in the middle, and Mark was trying to show me something and Abbie was looking at a photo album.  Abbie would reach up and move my face so I was looking at her so she could point stuff out to me in the album.  She just kept saying “mommy” over and over and over until I’d respond and look at her.  It was exhausting.  She threw a huge fit before her bath and after her bath, and when we were putting her to bed.  She only wanted me touching her and if Mark touched her she’d try to slap him.  And if he held her she’d try to claw his face off.  I honestly don’t know where she gets that temper.  My parents have said I was absolutely nothing like that and I don’t think Mark was like that when he was a toddler either, so I’m not sure where this is coming from or how we remedy it.  But it breaks my heart when she’s like that to Mark, especially when it’s the night before he leaves for quite a while.  If she’s like this while he’s gone, I’m not going to last 5 days, let alone 5 weeks.  But she tends to act out much more when Mark is around than when it’s just her and me.  Granted she has her moments with me too, but they’re few and far between.

I’m going to try to keep busy with my quilting while Mark is gone.  I have quite a few projects I have started, want to start or want to finish so it’ll be interesting to see what I accomplish while he’s gone.  But I’ll post more on that later.

Thank God it’s a BEAUTIFUL, sunny, have your windows open type of day here today.  I think that’s God’s little gift to me because it does wonders for my attitude.

“Every day may not be good, but there is something good in every day.” ~Author Unknown

Hello, I found you via Wife of a Sailor. My 2yr old acts out when my husband is about to leave too. It never lasts but a couple of days before and after, but I think its her way of coping. She knows what is going on, and the minute he brings his sea bag out, the bad behavior begins. I saw that your hubby isn't leaving just yet and that is awesome! Good luck with everything!:)