But I still have my reservations about it all.  I have about 30 friends here that I could hang out with on a regular basis if I wanted to.  We’d all be in the same situation (husband-less) and we could all keep each other company.  During the day.  I’d still be alone (with Abbie and the dogs) every night, and I’m not big on being alone.  Especially not for months on end.  I’d have to deal with Abbie by myself, and we’re going on week 2 of this current TDY and I’m completely pooped from dealing with her all the time by myself.  She’s a really good little girl, and we’ve had a lot of fun, but the evenings are rough, and I find myself counting the hours until her bedtime once she gets up from her afternoon nap.

So I’m excited about going home, but I really only have about 5 friends in the area that I’m in contact with on a regular basis.  I’m hoping to get to spend bunches of time with them and catch up on the past few years, but I’m going to miss all my friends here too.  I already feel out of the loop here and I haven’t even left yet!  The girls are making vacation plans already and listing all the things they’re going to do while the guys are gone and I’m kinda bummed that I won’t be joining them.  Granted, most of these girls are child-less, and if I was child-less I think I’d have great fun traveling around Europe with friends too.  But traveling around Europe with Abbie by myself sounds like a nightmare, no matter how many friends are there to help.

I’m worried about living with my parents again.  For some reason we seem to have different views on how I should raise Abbie and it’s been an issue before and I really don’t want it to come to a head while I’m home.  And it’s hard to go from having your own house, your own space, your own way of doing things, where you’re the adult to being the “kid” again and not the person in charge of the house and how things are done.  It’ll be tricky, but hopefully it’ll work out.

I’m excited for our families to get to spend some quality time with Abbie.  Every time I talk to my parents they’ve thought of another thing they want to do with Abbie while we’re home or they’re asking me what she’ll think of ____ .  It’s pretty funny and I know she definitely won’t be bored.  I’m also going to try to go visit Mark’s family in Chicago once a month so they can spend time with Abbie and I can spend time with them.  Hopefully she’ll do okay with all the changes in sleeping arrangements.

Overall, I’m looking forward to going home.  I’m not looking forward to being away from Mark for that long, but I’m trying not to focus on that right now.  I think the hardest part of the whole thing, for me, will be knowing how much Mark is missing Abbie.  I know how much he loves his little girl and how much she loves him and all the attention he gives her, and no matter how hard I try, I can’t make up her daddy’s absence for her.  We’ll get through it, because we don’t have a choice, and I’m hoping it won’t be half as bad as I’m anticipating. 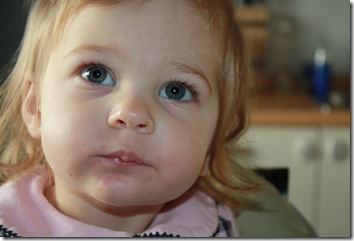 Don't worry about coming home. Things will fall into place with your parents and Abbie before you know it. We're definitly looking forward to seeing you and meeting Miss Abbie, and you and I can have quilting days if you like - I am sure you will be the one teaching me a thing or two! We can spend some time on the river, and you can meet our new puppy, who will (hopefully) be much calmer by next spring. Oh, and I got a blogger id so that you can see it's me viewing your page. Talk to you soon!!