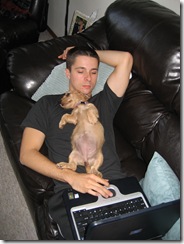 I took Sadie to the back vet today.  I was so nervous he was going to give bad news, saying that she’d need surgery and that she’d never be “right” again, but thank GOD that wasn’t the case.  (And thank you SO much Brittney for going along to help me with Abbie.  You definitely made things much easier, as usual!) 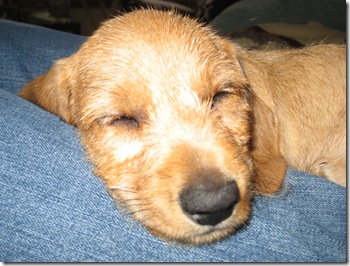 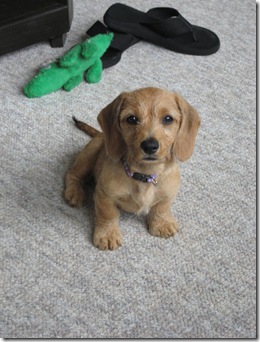 The vet was very pleased with the progress Sadie has made.  He said, especially since she didn’t have surgery and she was dragging her legs around behind her 3 weeks ago, she’s doing VERY well.  He said that he doesn’t see dogs recover that quickly very often from a spinal cord injury, so she’s doing really well. 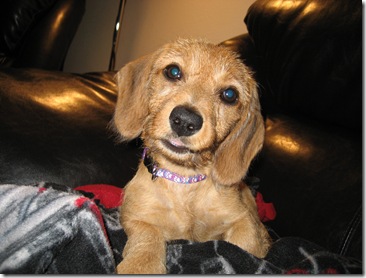 The vet told me to cut her down to 1/4 of a steroid pill for the next 3 days and then take her off them completely.  He said that she should still be on cage rest and not moving around much for the next week, but after that I should start letting her play outside for 15 mins three times a day.  He said it’ll take 3-4 months for her to full recover from the trauma to her spine, but that she’s doing really, really well and we are lucky.  Again, thank God.

(These next two pictures were taken the day we brought her home, but all of them were taken in May 2007.) 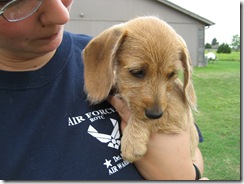 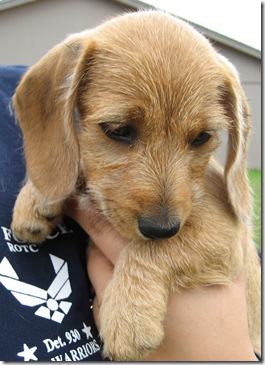 So overall, she’s doing really well.  She seems to have made improvements even in the last day or so.  He said it is definitely affecting her left side the most and that she should never really do stairs or jump on and off furniture again, but she also needs to keep her muscle density up to help her stay strong to avoid injury again.  So I’ll keep an eye on her and get my arm work out 4-6 times a day hauling her up and down the stairs.  Thanks for all your prayers and everyone asking about her all the time.  Your concern for my animal really touches my heart and I’m blessed to have so many caring people in my life.  Thank you.

Sadie is so cute! I'm glad you got good news.

I can see our old house in the back of your pictures! Ha! Glad she's doing better!!

Her puppy pictures are sooo cute. Sadie is such a good doggie, I'm glad she is going to be okay, I have been worry about her.

yay for sadie, i am SOO glad to hear that. She is the cutest stinking dog!!!