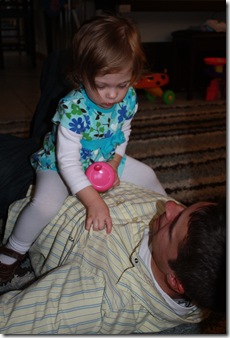 Mark made it home yesterday and we were very happy to see him.  Abbie immediately wanted him to take her to get some food at the airport.  She grabbed his finger right away and started pulling him towards the little restaurant in the airport while pointing to her mouth and saying “eat!”.  She doesn’t beat around the bush at what she wants.  She was ALL OVER him (quite literally – see above) once we got home and she would get very upset if he left the room.  She is 100% a daddy’s girl.  When she woke up from her nap she asked for daddy as soon as I opened the door and she was more than thrilled when he went in to get her up this morning.  I listened to the two of them laughing at each other from the living room.  It just melts my heart every time I hear them laughing together, which happens quite frequently.  Today Abbie and I took Mark some lunch, but we didn’t really get to do more than say a quick hi and hand the lunch over.  Naturally they wouldn’t give him any down time when he got back from a trip.  He’s in the swing of things full force, but we’ll enjoy his time off on Thursday and Friday in Cinque Terre.  Abbie was running around the squadron calling for him while she was looking for him.  I think it confuses her when she sees almost everyone dressed the same as her daddy usually is, but I held her up to a board with everyone’s pictures on it and she picked Mark out right away. 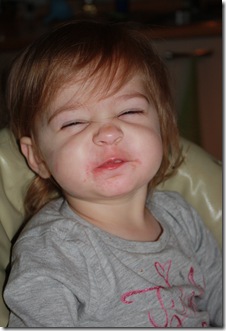 This time when Mark was gone was INFINITELY better than last time.  I don’t know what my deal was last time, but this time was the polar opposite of last time.  Abbie and I had fun, she slept GREAT the entire time he was gone and I wasn’t stressed.  She is doing better at entertaining herself now, which allows me to do other stuff besides keeping her occupied the entire time she’s awake, and that helped out a bunch.  She wasn’t teething, another HUGE plus.  She is going to the sitters now and I had friends babysitting so I could go to practices, so I got some breaks which was great.  (But VERY expensive…  The last week Mark was gone I spent over $150 in babysitters….)  And I was feeling much more settled before he left than I did the last time.  In August I was still adjusting to life in Italy, and now I feel comfortable here.  Fingers are crossed that the next TDY goes as well as this one did. 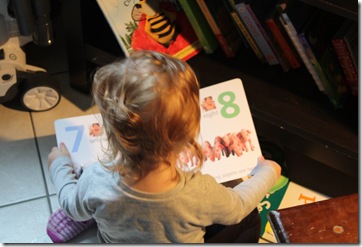 I almost got everything done that I wanted to.  My Christmas cards are pretty much done.  I have to finish 15 more of the letters and then stuff a bunch of them with the letters and pictures and put stamps on them all and then I’ll be done.  I’m praying to God I find my address stamp soon because that’s going to take a TON of time if I have to hand write our address on 150 envelopes…  I have no clue where that stupid thing went!

My quilt is almost done.  I have 2 more sides to finish the binding on and then it’ll be done and ready to send.  I have a bunch of boxes that I need to get ready to mail so they get to the States on time.  I plan on doing that next week when we get back from Cinque Terre and before we go to Amsterdam.  Whew! 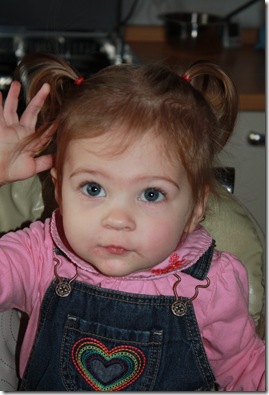 I also love how excited she was to see her daddy that she wanted to share in one of her favorite past times... eating! LOL.
Eliana loves going to restaurants. She gets very excited if we go to one, mostly so she can ham it up with folks.