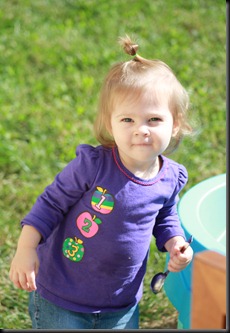 Abbie is currently in the prime of her separation anxiety phase.  It’s rough on both of us.  I think it was brought about by the fact that we’ve gotten much busier in the past week or so.  I’ve been trying to get more involved with things, and get Abbie socialized more, so she’s been spending more time away from me, which she apparently doesn’t like.

We went from pretty much hanging out at home and running errands to having things on our schedule almost every single day.  I worked her into going to a babysitter slowly.  She went once for 2 hours, and then for 3 hours and now she goes twice a week for 3 hours each time.  I took her to story time at the library, which was more of a chase Abbie for an hour all over the library session, this week.  And today I went to a bible study on base that had free child care.  I liked the worship and fellowship part of it, but it lasted for almost 3 hours which is a little too long for my tastes, so I’m not sure we’ll be doing that every week.  Plus there’s a playgroup that is at the same time as the bible study and I think Abbie would get more out of that, so we might try that next week when Donna is here.  I’ve also been going to crud practices, which I LOVE.  That game is so much fun to play and lots of girls in the squadron like to play it too, so it’s fun to get together with all of them and have a good time.

So Abbie hasn’t been sleeping well at all since we started getting out and about more.  I thought that getting her out of the house and exposing her to more would help wear her out and make her sleep better, but instead it’s given her a huge case of separation anxiety.  She cries and says “mommy” any time I go out of her sight, which includes bedtimes and naptimes.  She’s getting both her bottom incisor teeth right now, so I’m not sure if that’s contributing to her waking up at night, but it’s a battle to get her to actually go to sleep and then she wakes up all the time during the night now, sometimes as much as 6 times.  Before I could just put her in bed with her bottle and she’d finish her bottle and go to sleep.  Now as soon as we leave the room, she whips her bottle, blanket and both stuffed animals out of her bed and stands there and screams for 5 – 30 mins.  I’ve been reading the book “Healthy Sleep Habit, Happy Child” and he basically says at this age, going in to her isn’t going to do any good besides teach her that if she throws a fit, I won’t make her go to bed.  We’ve tried sitting in there with her until she’s asleep, which can be upwards of 45 mins of us sitting in there until she’s asleep, but as SOON as we leave, she’s up screaming.  I don’t want to get into the habit of staying in there until she’s asleep so we’ve stopped doing that and she’s just going to have to work it out herself and figure out how to go to sleep by herself again, like she used to.  I’m hoping this is a short lived stage, but we’re going on a month of this already.  The past 6 months of her sleeping great were apparently a big tease. 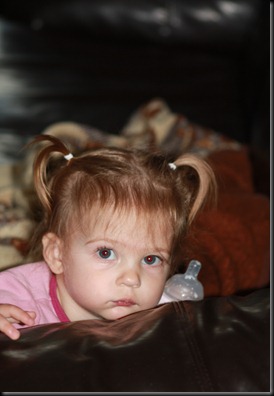 Friday Victoria is coming over to babysit her so we can go to a First Friday on base, so hopefully Abbie will go to bed easier for her, but I doubt it.  Hopefully Donna can sleep through her screaming while she’s here too.  Monday I’m going to a spouse symposium most of the day and Abbie will go to the childcare they provide for it.  I’m excited about that, for me, not for Abbie.  I’m sure she’ll make it hard to leave her, like she usually does.  Monday night I have a squadron coffee to go to, and I’m excited about that too.  Tuesday I’ll spend most of the day getting ready for Donna to be here and one of my friends, Cassy, is going to come over to watch Abbie for me for a few hours so I can clean.  (Abbie can open doors now, so I can’t leave her in the living room by herself and run downstairs to do laundry or get the guest room ready, like I used to be able to.  As soon as I go downstairs, she freaks out and runs to the door and now opens it, and I don’t want to risk her falling down the stairs.)  Wednesday Donna gets here, and I have crud practice in the afternoon.  Friday, Mark’s brother, Ryan gets here.  Hopefully all this time with family will make her less clingy to me. 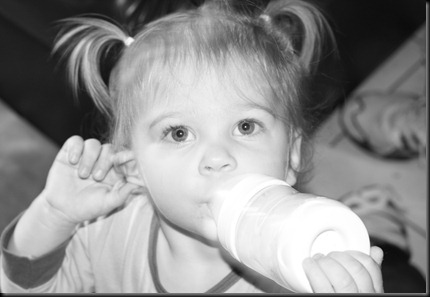 I found this little guy on our porch last week.  Aren’t praying mantis’s supposed to be good luck?? 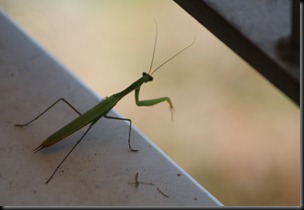 awe I know the not sleeping is so tough, but I don't think I'll ever do cio again. I've read that book and thought it was great at the time, now I regret it.