First trip to the Italian ER 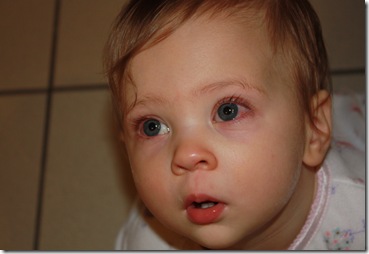 So we’re relatively new to this parenting thing.  This is the first time Abbie’s really been sick in the 10.5 months she’s been here, so we’re extra edgy about all of it.  Yesterday, she started getting pink eye.  I called a nurse help line and did this over the phone assessment with a nurse in Chicago (who reminded me SO much of my aunt Claire – she even sounded like her!) and she recommended that Abbie be seen by a doctor within 18 hours.  Since today (Friday) was a family day on base, the base clinic wasn’t open so at 10pm on Thursday night, we loaded her up and headed for the ER in Pordenone.

Going to an ER for the first time with an infant, in a foreign country, with socialist healthcare, where you don’t speak their language, is interesting, to say the least.  We had to park about 2 blocks away from the ER entrance (Mark said it was a good thing we weren’t going there for a broken leg) and walk down this dark, tree lined street with a FREAKY brick building with all the windows dark.  I would have been scared if it had just been Abbie and me, but since Mark was there, it was okay.  Then we had to go find the pediatrics floor, which was on the 5th floor of a building in the back of the hospital.  The building was very dark, very quiet and very empty.  Quite a few of the lights were off, and the doors to most of the hospital rooms were locked.  It was just weird.  The hospital felt very cold.  There was nothing “soft” or “warm” about it.  The room we went into had a hospital bed that was like a mat on 4 thin legs with that paper stuff over it, and it had a desk with a computer on it and 2 chairs, and a big medicine cabinet with glass doors, and that’s it.  Nothing on the walls.  No color anywhere.  Nothing on the desk even, except the computer.  Mark said that’s what socialist healthcare is like.

So they called a translator as soon as we got there and he was with us the whole time we were there and waited for over an hour with us before we were seen by the doctor.  When the doctor finally came in, she looked in Abbie’s ears and throat and at her eyes.  I asked them to take her temp again since she seemed warm to me again, and she did have a small temp again, even though she was fine when we had gotten there.  It was weird having the doctor talk to the translator and then have him tell us what she was saying.  I felt like we weren’t really getting the whole story because she’d talk for like a minute and he’d give us a 10 second version of whatever she’d said.

In the end, they told me to give her a syringe of this clear liquid (that I guess was Tylenol??) and said to go home and if it gets worse to come back.  They didn’t give her any meds, just confirmed that she does have pink eye.  It kind of annoyed me and I felt like if we’d been in the States they would have given us medication for her.  Mark said it’s probably better we didn’t get medication for her since we wouldn’t have really known what it was anyway.

So it was an interesting experience.  Here we were hoping to go to Venice this weekend and instead we got a tour of the pediatric floor of the Pordenone hospital.  11 days in Italy and we’ve hopefully gotten the worst out of the way!  She’s still all congested and her eyes are still red and she’s had a fever on and off, but she’s active and plays.  We just hope she gets better soon because we hate seeing our little pippers not feel well.

Sorry!! What a thing to have happen right after you get there. FYI- there isn't much you can do for pink eye but wash your hands and wait! I'm sure she'll be better in no time :)

Lexie had what I thought was pink eye not that long ago. She woke up one morning with her eyes all goo'd up and unable to open them. I took her to the Dr and he said since she had a cold she probably had just wiped it into her eyes and some times they just get a cold in their eyes. He gave us drops to put in her eyes but that was a nightmare to try to get her to hold still finally we started sneaking in her room when she was asleep and putting them in. My mother-in-law suggested using baby shampoo like Johnson and Johnson on a warm wash cloth and cleaning her eyes and no need to worry since its tear free. This seemed to help Lexie alot. I guess its some time of home remedy she used to use for pink eye years ago. I hope this helps.
Lesley