Today Mark and I took Abbie to her 9 month appointment.  In all honesty, I was much more worried about Mark at this appointment than I was Abbie.  Mark has only been to one or two of her other well baby visits, and he was quite nervous about her getting a shot.  For the past few days he’s been asking me how she’ll react and what we have to do during the appointments, etc.  It’s pretty cute.  I’m happy to say, both Mark and Abbie survived the appointment.  =) 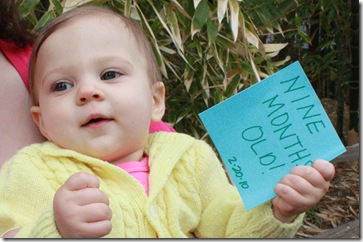 She had to get one shot today – her polio vaccine – and Mark was VERY nervous about that.  But Mark held her arms, I distracted her with a toy and the nurse held her legs and gave her the shot.  She sort of jumped a little and got a startled look on her face, but by the time she started to pucker up, Mark was already picking her up.  She let out a little whimper, a big sigh (not as big as Mark’s though), and then she was fine, and Mark was breathing normally again. 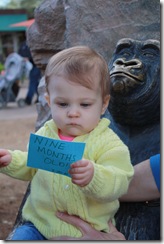 I cannot believe how fast Abbie seems to be progressing lately.  It seemed like she was working on crawling forever.  Since the 14th of February, Abbie has started crawling, she can easily pull herself up to a standing position, she’s cruised along the couch by herself once, and any time she’s in the upright position, she’ll move her feet to walk now.  NONE of that was happening 11 days ago.  I cannot believe it.  Maybe all of this is normal, but since she’s my first, I have no clue how fast kids usually pick up on these things.  She’s growing up way too quickly. She’s babbling quite a bit lately.  Any time she sees us drinking, she wants some of it, and she does fairly well drinking out of a cup.  I still nurse her 3-5 times a day, and she’s wearing size 3 diapers.  She’s in only 9 month clothes now, although there are a set of Gerber onesies that are 18 months that fit her!  That brand’s sizes are so far off from the rest of them.  She’s still taking 2 naps a day (except for today…), and she sleeps 10-12 hours at night.   She’ll wave bye bye sometimes and you can ask her where Abbie’s tongue is, and she’ll stick it out.

It is increasingly harder to get pictures of her with her little signs.  These ones are the best we could do, although all the zoo pictures where taken on her birthday.  I need to get a bigger SD card for my camera because I took 1.6 GB of pictures at the zoo alone and our SD card for the camera is only 2GB.  I think I need at 8 or 16 GB one. 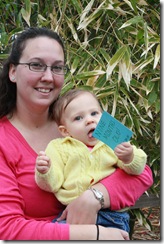 My cousin sent me an article from the New York Times online that was about traveling in Venice with an infant.  Apparently Italians LOVE babies, and you get preferential treatment over there, if you have a baby.  This article was talking about how these elderly Italian ladies thought their 10 month old was great and the writer said something like “We knew that she was spectacular, we just weren’t sure everyone else knew too”.  It made me laugh because I’m fairly certain that every parent feels that way about their child.  (And if they don’t, something’s a little off…)  But reading that article made me excited to go to Venice with Abbie, and since we’ll only live about an hour from Venice, hopefully we’ll get to go there often.  (And the article even mentioned how perfect it was to have the Ergo in Venice since a stroller would have been a pain with all those bridges.) 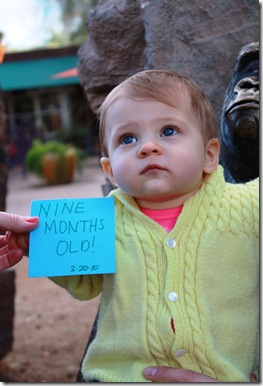 Anyway, that’s the news for now!