May your days be merry and bright. 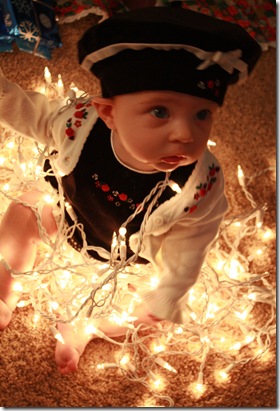 If I had been thinking, I would have put this on our Christmas cards, but I didn’t take these pictures until after I’d already sent my cards out.  Oh well.  Maybe next year.

Our little pippers is just growing up way too quickly.  She gets more and more fun every day and it is so fun watching her experience the world and see new things for the first time.  She’s a pro at sitting up now, although she still can’t get into the sitting position by herself.  If you sit her up though, she’ll stay there for quite a while, unless she sees something she wants and then she lunges for it. 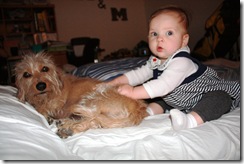 She doesn’t crawl yet (which is perfectly fine with me), but she’s good at rolling around and she kind of rolls around to get places now.  She’s quite often in her “flying mode” as we call it, where she lays on her belly and lifts her arms and legs in the air and kicks her feet like crazy. It’s pretty cute. 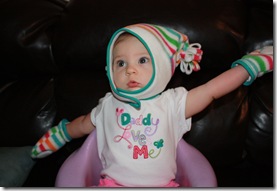 We’re trying to get ready for our big trip home for the holidays.  I got her these mittens and hat at Old Navy and I think they’re the cutest thing ever.

Abbie is a great little eater and she LOVES to eat.  I still nurse her 4-6 times a day and she gets a bottle from daddy before bed.  I’ve been feeding her breakfast and dinner with solids, although I think I might add lunch in there now too.  She’s VERY interested in what we’re eating and if I try to give her a puff instead 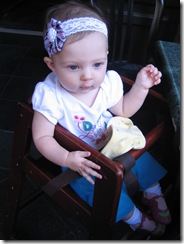 She has quite the little temper on her though.  I honestly didn’t expect her to be so …. strong-willed at this age.  Sometimes when she’s throwing a fit, she won’t even let you touch her.  I’ll try to put a pacifier in her mouth and she’ll smack it out of your hand.  Or I’ll try to put my hand on her chest if she’s laying in her crib to calm her down and she’ll grab my hand and push it away and not even let me touch her!  I can’t believe that she’s that full of piss and vinegar already!  Usually her fits are short lived and they only happen when I put her in her crib to go to bed and she doesn’t want to.  Little fart.  She doesn’t want to have anything to do with pacifiers anymore, which is probably a good thing.

Speaking of her sleep habits.. I haven’t written about them in quite a while.  I guess that’s what happens when I actually get sleep – it’s not at the forefront of my mind so much.  She’s a pretty good little sleeper now.  She’ll still cry when we put her down for naps or for the night sometimes, and it ranges from 30 seconds to 10 mins, but then she’s good.  She takes 2 naps a day usually, 1 around 10:30am and one around 3pm.  They last anywhere from 45 mins to 2 hours and 15 mins.  If I don’t have to wake her up, I just let her sleep as long as she wants.  She goes to bed anywhere from 7:30pm – 9pm, although we aim for 8pm every night.  95% of the time when we put her down for the night, she stays asleep all night.  Every once in a while she’ll wake up around 11pm and if she cries for more than 10 mins, I’ll go in and get her, change her, feed her and put her back to bed.  She gets up anywhere from 7:30-8:30am.

Mark and I always tip-toe into her room on our way to bed at night just to check on her and to make sure her room isn’t too hot or cold and admittedly, I usually make sure she’s breathing.  If I can’t hear her, I put my hand on her to feel her chest moving.  I wonder if I’ll ever stop doing that. We love watching her sleep.  She looks so peaceful and cuddly.  I took this picture of her a few nights ago.  She fell asleep while Mark was feeding her her bottle before bed.  We think she looks just like a doll and I’m not sure I’ve ever seen anything quite so perfect. 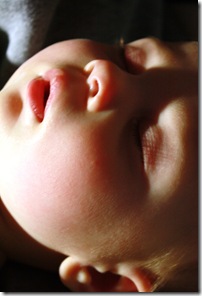