Abbie’s first tooth made it’s appearance today!  You can just see a tiny little bit of her bottom left front tooth.  I knew they were coming soon since she’s been chewing on everything and anything, and we had a HECK of a time getting her to go to sleep last night, so maybe that had something to do with it.  She also has her first runny nose (or any sort of illness) that showed up today also, so I’m not sure if that has something to do with her tooth or being in the cold weather for the first time or both.

Abbie’s 7 month birthday was on the 20th.  We took her pictures in a hotel room in Lincoln, NE since we were on our way home.  It’s incredibly hard to put my little post-it’s next to a 7 month old and not have her grab them but here are a few of the pictures we got. 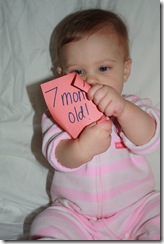 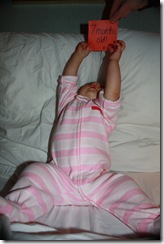 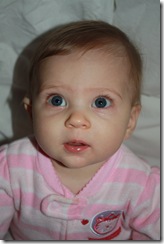 My cousin and his fiancé brought my grandma over on Tuesday.  It was fun to see Michael and Brenda since we don’t get to see them very often at all.  They left Wednesday morning and drove 18 hours straight to my aunt and uncle’s in 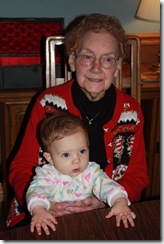 Denver.  (Yikes!)  While my grandma was here she taught me how to purl with knitting.  So I’ve finally been working on the blanket I’ve been making for Abbie since this time last year.  It’s about 4 inches long at this point…. I have ways to go… 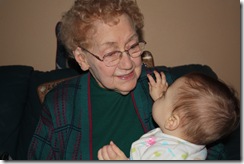 It was sad saying goodbye to my grandma.  She got a little teary eyed, and so did I because we both know that Saturday could have very well been the last time we’d see her.  She’s 94 years old, and while she’s doing well for being 94, she’s not a spring chicken anymore.  With us moving to Germany in March, we’re not going to be back up here before we move, and we have no clue when we’ll be back in the States.  So…  not something I like to think about, but it’s a reality for us.

Hope you all had a very Merry Christmas.