…the motherland!!!  That’s what I keep telling the weinas anyway.  (Get it?  Dachshunds are from Germany?… ?  Anyone?)
Anyway, Mark and Abbie and Ollie and Sadie and I are going to be heading to Germany.  Spangdahlem ( got that mom…) to be exact. 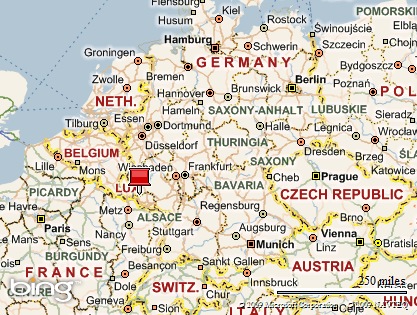 So as you can see from the map, we’ll be on the western side of Germany, about 40 mins from Luxemburg and less than 2 hours west of Frankfurt.
Mark’s class tried to “bro it out” (come to a decision without bringing the “chance” factor in to it) but they ended up rolling dice.  Mark rolled a 10 so he got to pick 2nd and we didn’t even practice his dice rolling skills before then (although we seriously thought about it).  Our good fortune and excitement was somewhat dampened since one of the guys in his class is going to Korea and that was his 3rd choice since he has a wife and a 2 year old.  I feel bad for them, but I am thankful that it was their 3rd choice vs.. their last choice.  Everyone got their 1st, 2nd or 3rd choice, which isn’t bad.
Mark’s report no later than date is March 30th so we’ll be headed over there sometime between mid-Feb to mid-March (read – when Abbie is 9-10months old….  God help us…. It’s a 7+ hour flight….).  Have I mentioned how much she likes to scream/ squeal?  She seriously does it all. the. time.  When she’s happy, mad, excited, tired, etc.  This should be interesting.
So in the next 4 months we have a TON to do.   Europe has different electrical voltages than we do, which means our appliances and electronics won’t work over there without special transformers/converters.  So we’re going to get rid of a few of those type of things.  We’re going to sell both cars and upgrade to a bigger car since the car seat doesn’t fit in the Jetta very well and we sure as heck don’t want to take the gas guzzling Explorer to Europe.  I need to get rid of a ton of clothes and other miscellaneous junk since European houses usually don’t have any closets.  Imagine me, someone who’s at least in the top 10 of the world’s biggest pack rats, living in a house without closets?  Ha.  We need to brush up (aka – learn) German, although most people over there do speak English.  I just think it’s rude to live in a foreign country for 3 years and not at least try to speak their language.  And most importantly, we need to figure out how we’re going to be able to watch our American TV shows while living in Germany.  (We’re moving in the middle of American Idol!!  I can’t miss that!)
Anyway, we’re super excited about this next adventure.  It’s funny because I distinctly remember thinking to myself shortly after Mark and I started dating that it would be great fun to have the chance to live in a foreign country for a few years since he was going to be joining the Air Force.  Most jobs don’t provide you with that opportunity, but we’re blessed that Mark’s does.  And we got that chance all because of the roll of a pair of dice.
PS – I actually met Mark for the very first time in Germany!  He was studying abroad and I was visiting my friend and his college roommate, David, who was also studying abroad.  I actually met Mark’s parents and younger brother for the first time over there too, since they were visiting Mark the same time I was visiting David.  How ironic!  Six years and a month and a half later, along comes this… 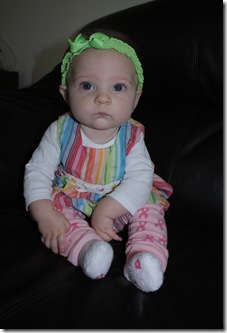 AHHHH!!! How exciting!!! I am really excited for you guys!! I am sure you will LOVE it over there!