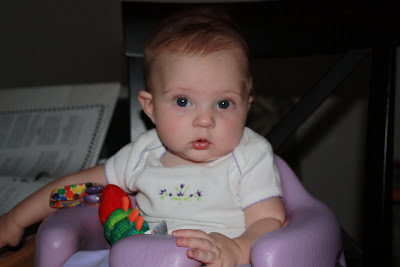 Not a whole lot is going on here. I feel like I don't really have a whole lot to report. Abbie is on to sweet potatoes now as far as foods go. Every time we give them to her she gets a really funny look on her face at first, and then she decides she likes them again and then she can't get enough of them. You can't shovel them in to her mouth fast enough! And she makes "mmmm" noises the entire time she's eating with a few grins in between bites. So it's pretty obvious that she likes them. We got it on video so I'll have Mark put the video up soon. I think we're going to try squash or carrots next. She's also discovered her tongue and her feet. She sticks her tongue out all the time now and she's grabbing at her feet quite a bit. She's pretty good at sitting up can sit up just holding on to your fingers for a pretty decent amount of time. Her sleeping habits are still completely hit or miss, which drives me batty. One night she'll sleep 8+ hours straight and the next night she's up 3 times. I really don't know what causes the variation at all. For a while there she was taking like 3-4 20 min naps per day and that was it. That was exhausting but she seems to be taking longer naps now.
Mark is only flying twice this week, which has only happened a handful of times since he's been in this training. They had no fly days Tuesday and Wednesday and he was supposed to have Wednesday off completely except one of the other squadrons decided to pull a prank on them and put a ton of sand in Mark's squadron. So he and his classmates spent like 3 hours cleaning up almost 9000lbs of sand on his day off. I can't wait until he's not "low man on the totum pole" so he doesn't have to deal with stupid stuff like that anymore.
I've been thinking about what I want to wear to Mark's graduation lately. He's going to wear his mess dress (formal uniform) so I need to wear something formal too. I don't think I want to go with a long gown again though. I think I want a shorter dress that I can wear to his graduation and to my cousin's wedding next month. Hopefully I'll even be able to go to his graduation. If we can't find a sitter for Abbie I won't be able to go. We only have like 2 couple's we know here that aren't in Mark's squadron (everyone in his squadron will be at the graduation) and if neither of them can watch her, I'm not leaving her with a stranger so I'll probably end up staying home with her. Hopefully we can find someone to watch her for that night though.
Well Abbie's "calling". Better go get her. =)

I have an update for you:

Abbie- Getting Cuter by the Minute.