Before y'all get your pants in a bunch, there's no baby yet. I wish there was because I would give anything to not have to pee 6+ times EVERY night, and to not be sweating hot even though it's 69 degrees in the house. She'll be here soon enough though. I was convinced two weeks ago that she was going to be early, but now I'm not so sure. I'm slightly worried I'm going to have a 10lb baby. I'm not a little person to begin with, and with my Buddha belly added to my frame, she has a pretty good sized home to live in, and she's taking up ALL of it. That's why our OB thinks she's already 8+lbs, because my belly is so tight and it's all baby. But she seems to be pretty content in there right now. I've only been having minor contractions still. Her due date is in 2 and a half weeks. My next OB appt is tomorrow (Tuesday) at 4pm.

Part of me isn't ready for this pregnancy to be over. I LOVE being pregnant. I love having random people come up to me and ask me when I'm due and what I'm having, etc, and then tell me about their kids or their pregnancies. I love walking around and getting these knowing smiles from lots of women. I love feeling her move around inside me and being able to push on parts of my belly and have her push back. It's like having our own little language that no one else understands, except for maybe Mark since he pushes on my belly a lot too. Even the anticipation of what she's going to look like and what her personality will be like is fun. If only I could bend over easier, and I wasn't so hot all the time and didn't have to pee tons in the middle of the night, I'd want to be pregnant forever. But I'm sure it just gets better from here anyway.

My parents and Mark's parents and our good friends, David (who was the best man in our wedding) and his wife Amy, all sent me Mother's Day cards, which totally made my day. And Mark got me a Mother's Day card too and one of the things he wrote in it was "Thanks for growing our baby." which I thought was really sweet.

Last week we had another little mishap with Sadie. I swear that dog is going to give me ulcers. We've been doing this thing with them for a while now, that we call "night night drinks". We ask them if they want a night night drink before we go to bed, and if they do, they definitely make it obvious by jumping up, licking their lips and walking around in circles wagging their tails. It's to the point now where we don't even have to ask if they want one - they let you know - and it's not so much a "night night" drink anymore. It's more of an "any time either of us is in the bathroom" drink. So when they want a drink, we'd pick them up and put their front feet on the edge of the sink and hold our hand under the faucet and let them drink the running tap water. They LOVE it. At our new house though, we can set them both on the bathroom counter and hold our hand under the water and they both get a drink at the same time. We've been doing this since we got here, and haven't had any problems. However, last Friday Mark gave them a drink and then turned around to dry off his hands and the next thing we know, we hear a thud and a grunt and Sadie is sprawled out on the floor. Apparently she had tried to jump off the counter by herself. Mark and I turn around (I was in the closet) and see her on the floor. She wasn't yelping or anything, but when she started to "walk", she was dragging both of her back legs, which completely freaked us both out. So I snatched her up off the floor and started to feel her legs for broken bones and at this point I'm already designing little carts in my head for a weina dog with useless back legs (I'd seen them on TV before). Mark got Ollie off the counter and then took Sadie from me and we both checked her over and didn't see any obvious damage, so we tried setting her on the ground again, and she took off just like normal. .... What the heck? We finally concluded that she somehow pulled either a back muscle or leg muscles because she had trouble jumping up on the couch or bed or going up the stairs for a few days, but she's good as new now. That dog is going to give me a heart attack one of these days. I spent all weekend worrying about her and watching her very closely, but she's okay. Lesson learned was to not turn your back on them for even two seconds when they're on the counter. This is why we have weina dogs. They're amazingly good practice for kids and we can get all our mistakes out on them before the blueberry arrives. =) 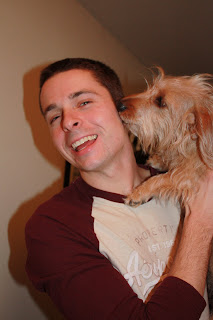 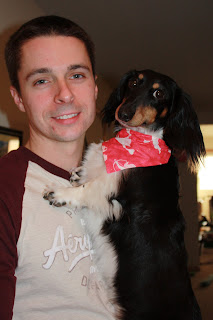 About time u updated your blog!! I was wondering what was going on!! Glad to hear all is well and Sadie isn't broken. Miss you!