A lil bit of everything..

It's been kind of uneventful around here lately. Well there's been some drama with our insurance and finding drs in Phoenix, etc, but it stresses me out to think about it so I'll write about that some other time.

We finished our baby classes, which was nice. Now I need to finish all the books I ordered. Good thing we have a few months before she's due. Our next OB appt is Monday so hopefully we'll have more U/S pics to share after that.

Sadie is doing great. She's pretty much back to normal and her boo-boos are healing very well. Her eye looks MUCH better and we stopped giving her the Tramadol (pain meds) bc we don't think she needs it. Thank God.

I got ambitious this afternoon and repotted all my plants. They looked like they were getting a little big for their old pots, so I got new ones for them. That was fun. I like playing in the dirt.

Here are a few pictures I thought I'd share. 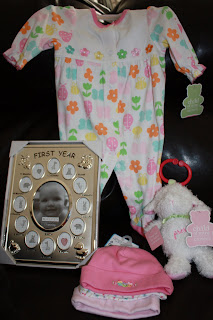 We got this stuff from Mark's family. I LOVE the little tiny hats! If the OB says to us on Monday "Oops, there's a wiener", I'm going to cry. I'm already hooked on the thought of having a girl. =) 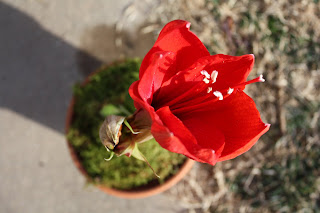 Mainly playing with the camera - but this is my new plant. I don't know what it is though. 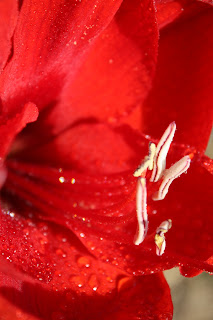 I love close up shots of flowers. 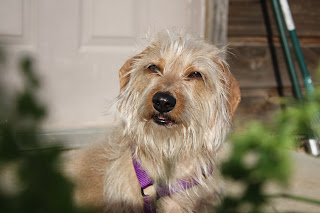 I thought Rooser's squinty face was hilarious in this picture. Proof to you all that she's doing MUCH better! (And that she ALWAYS wears her harness outside now when I take them out by myself. If Mark and I are both out there on opposite ends of the yard we don't worry as much.) 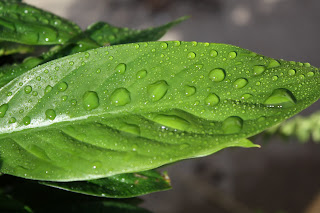 I thought this was a neat picture too. 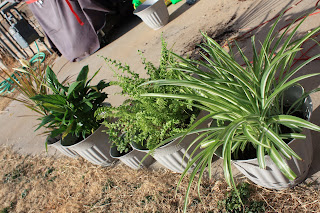 All of my plants in their new pots (except for the red one.) 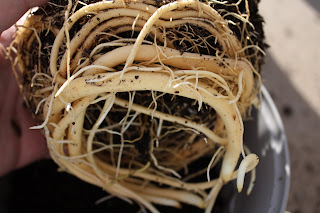 My suspicions of them outgrowing their old pots were accurate.... One of the other ones was even worse than this one. It had like an inch of dirt on the top and then the rest of the pot was just roots. I didn't know the roots "ate" the dirt... 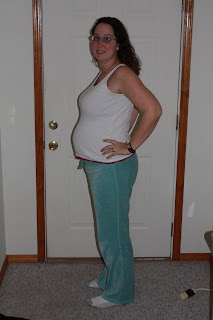 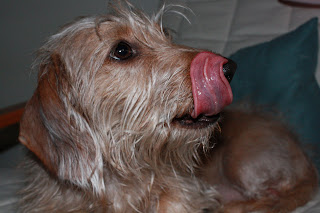 We gave Sadie her meds stuck in peanut butter, which she loved, and then we'd spend the next 5 minutes laughing at her bc of her crazy tongue!! It literally wraps all the way around her nose! 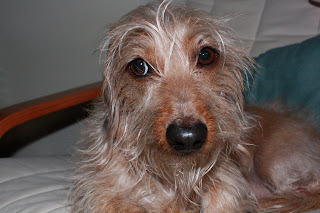 This was taken last Saturday I believe, so she looks a little forlorned here, but she's doing much better now.

What type of camera do you have? It takes great close ups! For some reason the last pic of your pup cracks me up. Such a cutie!

You are looking great! Halfway there! Not much longer!

Because I can't help myself, a plant lesson:

1. Your close-up is a really great shot of the anthers, the male parts of the flowers. The sperm are inside of those long parts that look like hotdog buns. The female part is the tall one that you can see sticking up above the anthers in the not quite so close picture. By the way, this appears to be something in the Lily family, possibly an Amaryllis, though I can't be certain from the picture.

2. Yes, plants do sort of "eat" the soil ... or rather, then convert into all the stuff they need to grow. Soil is really just tiny particles of mostly organic matter, plus vitamin, minerals, and other such things. The roots take up the various components of the soil and use it in photosynthesis, growth or reproduction. Same concept as when you eat a cheeseburger (or ceasar salad, or whatever).

That was supposed to be ... GREAT. You're looking really great.