First things first. Here are the US pics from yesterdays appt. 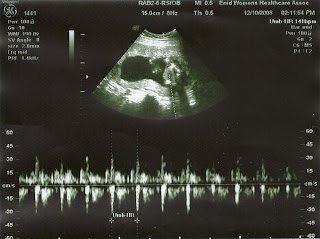 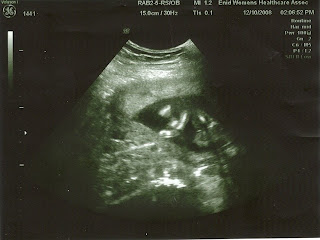 The blueberry's legs and feet. 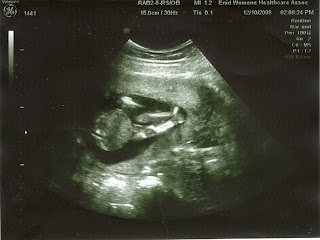 In the pike position, look at the top of it's head, with it's legs out in front of it. 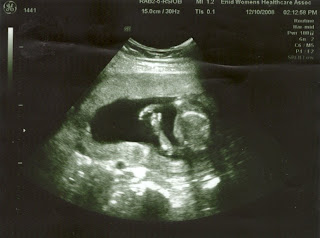 Top of head with arms and hands. 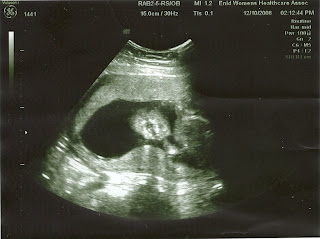 Face view.
My co-worker brought her husbands bp machine to work. We checked mine first thing this morning when I got to work and mine was 147/88. We checked it a few more times over about 2 hrs and the lowest was 137/85 I think. So I called my OB office and told them the readings from last night at Wal-Mart and this morning and told them I was a little concerned about pre-eclampsia. The nurse asked "Do you have blurry vision ever?" .... Well actually yes. I went to the optometrist for it a few weeks ago and he said my blurry/double vision is caused by severe dry eyes and scratches being on my corneas. "Do you ever see spots?" Yeah, actually.. I have maybe 2-3 times in the past 2 months. I thought it was because I got up too fast or something. "Do you have long lasting headaches?" ..... You mean like the ones I'm on meds for that last for 2 days even with me taking meds for them? Yes...
So I go to my dr at 3pm. My bp is 160/88. Perfect. I'm dying. <~~sarcasm Mark gets there a few minutes late because his sim ran late, but he makes it before the dr comes in to talk to us. The dr comes in and I say "I'm fairly certain I'm dying." He says "Yeah, we're going to ship you over to the hospital right now, and we'll probably just put you down to put you out of your misery." =) I explain to him how I'm at LEAST in the top ten of the world's biggest worrier's and all about the House episode I watched on Tuesday and how I know it's most likely in my head, but just in case I wanted to hear him say I'm not dying. (Or have pre-e or am at risk for harming the baby bc of my bp or however you want to word that. "Dying" is my shortened version.) He says I'm not dying and no more House episodes for me, but he would appreciate it if I do watch House or Baby Story or any other medical show to at least give him advance warning so he can watch it and be prepared, and in the case of House, know the treatment ahead of time. And then he said I'll probably want to call whichever pediatrician I plan on taking the blueberry too and give them advance warning that I'll probably be in 2-3 times a week after the baby is born. =) I love my doctor. But between all the joking, he said that pre-e doesn't usually start until at least 20 weeks, so I'm too early in the pregnancy to begin with. He also said that people that have pre-e are usually very sick, and since I'm pretty healthy, he's not too worried about it. He said my bp of 160/88 has no scientific meaning bc it's a skewed reading - meaning the ratio of the top and bottom numbers are too far apart. And he said you can't get a truly accurate bp reading unless you've been sitting/ resting for at least 3o mins before hand with minimal movement. He's having me come back in 2 weeks to check things out and give me piece of mind because he doesn't want me to think he's brushing me off - which I don't at all. I really, really like him. I'm sad that he won't be the one delivering our blueberry, which is a big thing for me to say bc I've never had a male OB/GYN. But he puts me at easy right away, and we have the same sense of humor and Mark and I both enjoy our visits with him.
So I'm much better now, and I'm not worried about it anymore really. I'm sure it'll still be high every time I go in there but I'm just cool like that, but as long as he's not worried about it, I'm not either. Em, I would still like those CD's you were talking about though, to borrow, if I can. They'd be beneficial either way I'm sure. Thanks!

Worrying is perfectly normal, but don't let it totally envelope you! I found that it is better to shut off your mind about some things while being pregnant and don't read too much shit on the internet! That will make you worry more! :)

That is great that you found such a nice good doctor. They are truly hard to find some times!

Is it sad that I already forgot how far along you have to be to find out the sex? I blame it on baby brain-- I remember NOTHING anymore! When do you find out?

I had another question but I totally forgot. Le sigh.

Glad all is well Monique.

I'll make you copies of the cds and bring them to Galena.

Evil Em- :P Hey I emailed you an invite to come see me!